This was contained in a statement issued on Friday in Ibadan by Mr Akeem Olatunji, the State Publicity Secretary of the party. 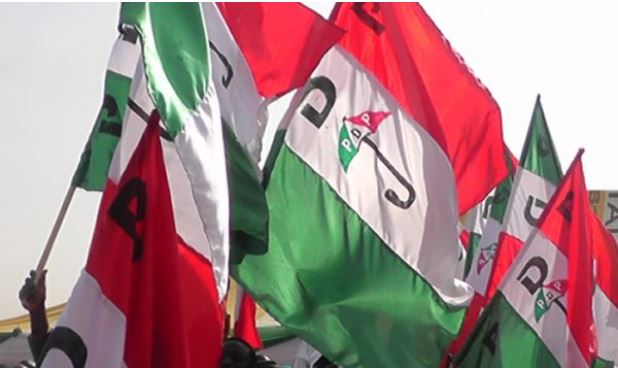 The Peoples Democratic Party (PDP) in Oyo State has warned its members to desist from instituting needless litigations.
It said they should use internal mechanisms available in the party to resolve all issues.
This was contained in a statement issued on Friday in Ibadan by Mr Akeem Olatunji, the State Publicity Secretary of the party.
The News Agency of Nigeria (NAN) reports that the party was reacting to the victory of Gov. Seyi Makinde at the Supreme court.
It would be recalled that Sen. Ayoade Adeseun, a PDP member, had dragged Makinde to the apex court over the party’s primary that produced Makinde as the gubernatorial candidate of the party.
The statement described the victory as a testimony of the transparent, free and fair primary electoral process that produced Makinde and other PDP candidates in the state.
”We want to assure the people of Oyo State that the government of the PDP will be a clear departure from the past when impunity, indiscipline, disorderliness and lack of cohesion were the order of the day,” the statement said.
The party hailed Makinde’s court victory, assuring residents of the state that the PDP-led administration would run the state with the same measure of credibility and transparency.
The statement further said that integrity, transparency and zero tolerance for corruption would be the watchwords of the governor.
It pledged the party’s continued support to Makinde as its leader, stressing that the present leadership of the party headed by Alhaji Kunmi Mustapha would make the PDP enviable in the state.
Top Stories