Double Tragedy: Nigerian Man Dies Shortly After Graduating Because He Got News Of His Mother's Death (Photo)


A promising Nigerian man's life has been cut short in a rather painful manner after he heard of his own mother's death. 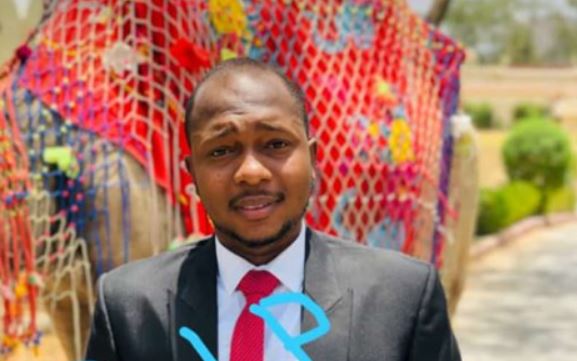 Sulaiman Abdullahi
A Nigerian man identified as Sulaiman Abdullahi from Adamawa State has reportedly died after news of his mother's demise was relayed to him while he was celebrating his graduation and Second Degree from Nims University, India.
It was gathered that Sulaiman Abdullahi fell ill immediately after hearing the news of his mother's demise. He never got better, and so died afterwards.
The news which was posted on Facebook by one Muhammad Bukar Umaru, a friend of Abdullahi.
"Shocked by the news of his mother's demise, amidst the celebration of his graduation, Sulaiman fell seriously sick, a sickness that would cease his life. Allahu Akbar. He has followed his mom to a better place In Shaa Allah.
Sulaiman just finished his 2nd Degree from Nims University in India. He was an indigene of Adamawa State and a graduate of Elkanemi College of Islamic Theology, Maiduguri. He was  a gentleman, very quite and humble. May Allah have mercy on his soul and his mother. May they both unite in Jannatul Firdausi. Ameen Ya Allah," Umaru wrote. 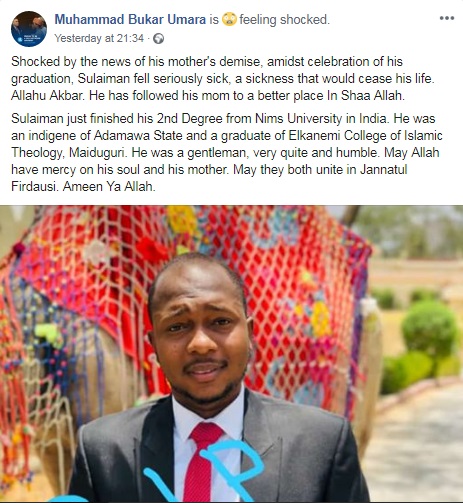