At least four suspected teenage robbers have died during a shootout with men of the Nigerian police. 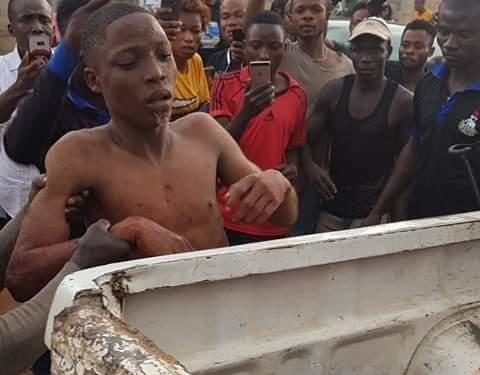 A teenage robber (Photo: TheNation)
Men of the Edo State Police Command have killed four teenage armed robbers who stole a Toyota Venza at gun point, according to TheNation.
The robbers were killed after engaging the police in a shootout.
Police sources said the robbers had snatched the Venza car along Etete road GRA.
The owner of the car was said to have quickly informed the police and the robbers were tracked to Country Home Hotel Road.
After the shootout, two of the robbers were shot dead while others who sustained injuries later died.
Residents in the area who had earlier scampered for safety rushed out to see bodies of the robbers.
One of the robbers, who said he was 18 years old, said they were taking the car to Lagos State for sale.
Commissioner of Police, Danmallam Abubakar, who confirmed the incident, said it showed the police in Edo are top of the game.
He said kidnappers along the Benin-Lagos highway would soon be apprehended.
Top Stories