A 65-year-old Nigerian man has been nabbed after he allegedly duped a Swiss woman with a fake marriage promise. 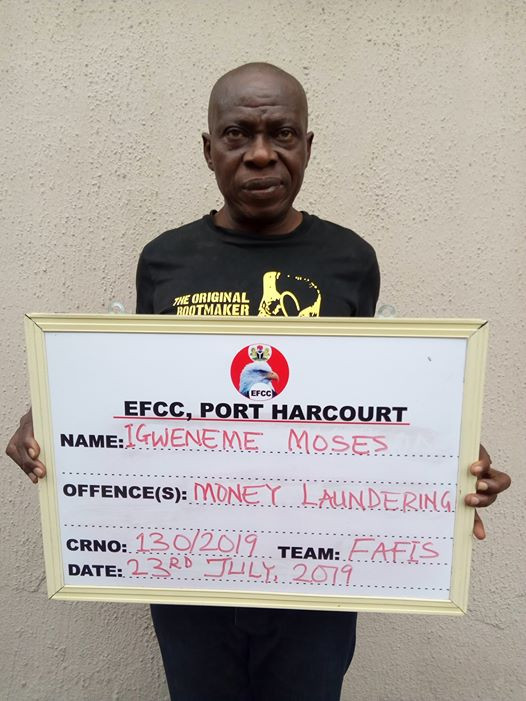 The man was nabbed by EFCC
The Economic and Financial Crimes Commission, EFCC, Port Harcourt's Zonal Office on Tuesday, July 23, 2019 arraigned 65-year-old Igweneme Moses before Justice A. T Mohammed of the Federal High Court sitting in Port Harcourt, Rivers State on a four-count charge bordering on conspiracy and money laundering contrary to Section 18 and punishable under Section 15(2) of the Money Laundering (Prohibition) Act, 2011 (As amended).
Specifically, Moses was docked for defrauding a Swiss, the sum of $240,700 (Two Hundred and Forty Thousand Seven Hundred American Dollars).

One of the count charges read: “That you, Igweneme Moses and Igweneme Nkiruka Blessing (now at large) between the 18th and 24th May, 2018 directly took possession of the sum of $38,000 (Thirty Eight Thousand US Dollars) which you knew or reasonably ought to have known is the proceeds of an unlawful act, to wit: obtaining money under false pretences from one Chantal Helene Meadery and thereby committed an offence contrary and punishable under Section 15(2) of the Money Laundering( Prohibition) Act, 2011( as amended)”.

He pleaded not guilty when the charges were read to him.

In view of his plea, Prosecuting Counsel, A. Osu, prayed the court to fix a date for commencement of trial. However, Counsel to the defendant, C.V Oforleta made an oral application for bail of his client to enable him prepare for his defence. The application was, however, turned down by the judge who ordered him to place a formal application for bail before the court.
Justice Mohammed ordered that the defendant’s case file be transferred to a vacation judge pending his formal bail application. He also ordered that he should be remanded in prison custody.

Troubles started for Moses when the EFCC was petitioned by the Attorney General of the Federation and Minister of Justice on behalf of Switzerland Government, concerning Chantai Helene Maedery, a Swiss that was allegedly defrauded by a two-man syndicate comprising Moses and his daughter, Igweneme Nkiruka Blessing (now at large) through fraudulent online dating schemes.

The petitioner alleged that the defendant "was involved in the act of fraud for commercial gain (Romance Scam) while pretending to be someone else through a dating app “Bumble.com ” as of 19th February, 2018 and promised to marry Chantai Maedery with the hope of building a future together in Switzerland".

Investigations showed that the syndicate had also defrauded other foreigners through their fraudulent dating schemes.
Top Stories