A vlogger has died while he was live-steaming himself eating poisonous insects and animals. 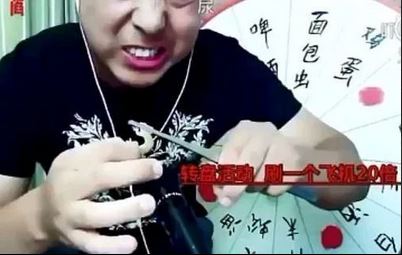 A Chinese vlogger died during a sick live-stream showing him eating poisonous bugs and geckos alive, according to local media.

Named only by his surname Sun, the 35-year-old's body was reportedly found by his horrified girlfriend at his flat in the eastern city of Hefei.
He was a popular figure on DouYu - a Chinese state-approved equivalent of YouTube, which is banned by communist party mandarins.

According to Xinan Evening News, Sun had filmed himself guzzling alcohol and eating animals as part of a stomach-churning challenge.

Sun's challenge involved him spinning a wheel marked with items - and he'd have to consume whatever it landed on.

Among the creatures he ate were poisonous centipedes, geckos and mealworms, MailOnline reports.
DOWNED VINEGAR AND BOOZE

He also downed vinegar, beer and a local liquor called baijiu in the warped video filmed for his 15,000 followers last Thursday. 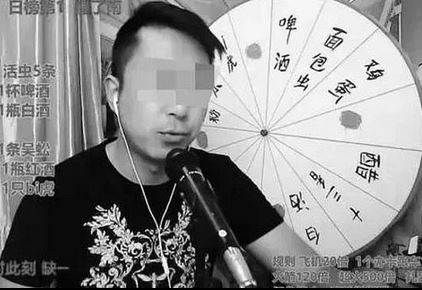 A wheel is marked with items including centipedes, vinegar and beer that he has to consume
Sun collapsed while the stream was still being broadcast - and cops later discovered his camera was still running when his body was found.

A formal cause of death is yet to be established but authorities have ruled out foul play.

Sun's videos have since been removed from the DouYu site.
BIZARRE FAD

Live-streaming has become hugely popular in China - where there are as many as 435million users, according to a report by China National Radio.

Some streamers have become millionaires off the back of their online fame - simply from filming themselves going about their days or singing, dancing and eating.

But the drive to set themselves apart from the crowd has encouraged some vloggers to attempt dangerous - and sometimes fatal - stunts.
***
Source: The Sun UK
Top Stories