How Ambode Narrowly Lost Out On Ministerial Appointment


To compensate Ambode, President Buhari was alleged to have promised to make him a minister in spite of Tinubu or whoever's ox was gored. 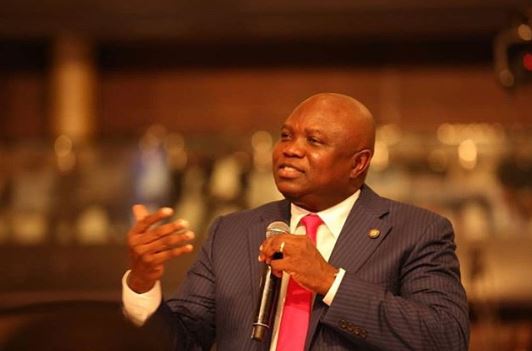 Akinwunmi Ambode
If the morning of Tuesday, July 22, had broken like the sweet melody of a blackbird, full of promise, freshness and newness to come, now, for proponents of Ambode-for-Minister, the day (and many more to come obviously) now sits like a cold cup of coffee waiting to be drained away.
Prior to the release of the ministerial list two days ago, aides, loyalists and fans of the former governor of Lagos State, Akinwunmi Ambode, had been venting and ululating about his purported ministerial nomination. And they backed their enthusiasm with believable arguments.
Described as having got power-drunk at the height of his governorship, Ambode laboured to get the ticket for a second term but was rebuffed to the consternation of political observers who felt strongly that he performed excellently in office. Sources in the presidency said the President felt likewise too and actually reached out to the National Leader of the All Progressives Congress, APC, and godfather of Lagos southwest politics, Asiwaju Bola Ahmed Tinubu to ensure Ambode was returned but it was too late as the political leaders in the state had made up their mind, it emerged.
To compensate Ambode, President Buhari was alleged to have promised to make him a minister in spite of Tinubu or whoever’s ox was gored. His cheerleaders further went to town saying that it was to underscore that the president was in Ambode’s corner that he visited Lagos in May to commission some of his (Ambode’s) administration’s projects including the 10-lane Oshodi-Muritala Muhammed International Airport Road; the 170-bed ‘Ayinke House’ (maternity hospital) at the Lagos State University Teaching Hospital, Ikeja; the Lagos State Theatre at Oregun, Ikeja; new 820 mass transit buses; and the multi-level Oshodi Transport Interchange along the Apapa-Oshodi Expressway.
Despite that some of the projects have still not been completed, the president commissioned them, saying, “Ambode has performed satisfactorily and should be commended for his contributions to the growth and development of the state.” The Ambode-for-minister crowd threw a victory party saying unequivocally that they had hit target; and that it was a matter of time before their man got a ministerial slot.
When news later emerged that the president had decided to have an expanded cabinet of 42 – 36 to represent each state of the federation and six to represent the geopolitical zones – it was further victory celebrations for the Ambode people who reckoned that the expansion was to accommodate disgruntled party members like him. Alas, the release of the list earlier today has thrown Ambode and his supporters into heartrending mourning.
Strangely, on different social media platforms, there is no pity for the former governor. Some jocularly said his name would be on the Vice Chancellor’s list – a euphemism for the practice in higher institutions where the VC has his own list of prospective undergraduates who did not make the school’s merit list. A twitter user wrote, “Someone said Ambode didn’t get the cut off mark that’s why his name is missing on the list.” To further rub salt on his injury, Ambode is still a trending topic on Twitter while the accompanying memes and GIFs are as hilarious as they are heartbreaking for the man on the receiving end.
Presidency sources said Ambode had to be left out because President Buhari could not deal with the catalogue of complaints against him and was mindful of the fact that going ahead with his nomination would be pitting him against Tinubu, a scenario he wanted to avoid at all cost. Thus, sacrificing Ambode was seen as a masterstroke in political calculations.
Source: The Capitalng
Top Stories