The former dentist was preaching outside Southgate Tube station in North London in February when he was approached by two officers. 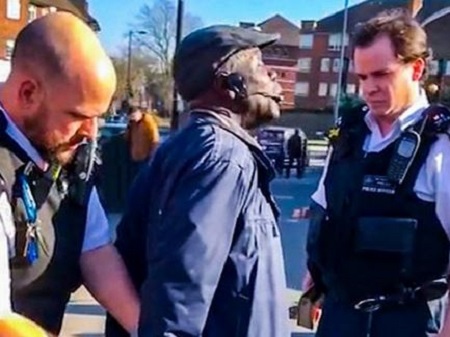 Ilesanmi was arrested while preaching on the street
A Christian street preacher who had his Bible wrested from him as he was handcuffed and taken away by police has been awarded £2,500 for wrongful arrest.

Oluwole Ilesanmi, 64, has welcomed the payout by the Metropolitan Police as a victory for freedom of speech after he had been wrongly accused of Islamophobia.

The former dentist was preaching outside Southgate Tube station in North London in February when he was approached by two officers.

A passer-by had earlier called police and accused Mr. Ilesanmi of hate speech.

He admits to having described Islam as an ‘aberration’ but insists he was simply expressing his point of view as a Christian rather than denigrating Muslims.

One of the police officers claimed Mr. Ilesanmi was disturbing the peace, saying: ‘No one wants to hear that. They want you to go away.’

A video of the incident taken by a passer-by shows the policeman taking the Bible away, to Mr. Ilesanmi’s visible distress.

One of the officers then says: ‘You should’ve thought about that before being racist.’

He was handcuffed before the officer gave a thumbs-up to the camera. Mr. Ilesanmi was then bundled into a police car and driven several miles away. There the grandfather was ‘de-arrested’ and let out of the car.

However, he was not carrying any money and it was only thanks to the kindness of a stranger who gave him the necessary bus fare that he was able to get back.

Scotland Yard has now agreed to pay Mr. Ilesanmi £2,500 for wrongful arrest and his humiliating and distressing treatment.

Mr. Ilesanmi told UK's The Mail on Sunday: ‘I believe God loves everyone, including Muslims, but I have the right to say I that I don’t agree with Islam – we are living in a Christian country, after all.

‘I was upset when they took away my Bible. They just threw it in the police car. They would never have done that if it had been the Koran. Whatever happened to freedom of speech?’
Watch video of Illesanmi's arrest below:
Top Stories