Abdul said the completion of the facility would enable the Agency to handle the rehabilitation of more drug addicts in the state. 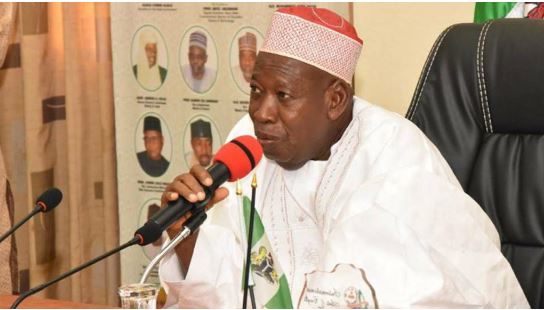 Gov. Abdullahi Ganduje
The Commander, National Drugs Law Enforcement Agency (NDLEA) in Kano State, Dr Ibrahim Abdul, on Tuesday sent a message to Gov. Abdullahi Ganduje of Kano state
The NDLEA Commander in an interview with News agency of Nigeria (NAN) on Tuesday in Kano, urged Ganduje to complete the 150 capacity rehabilitation centre started by the state government within the agency’s premises.
Abdul said the completion of the facility would enable the Agency to handle the rehabilitation of more drug addicts in the state.
He added that, “as a result of this situation, some of the clients had to be brought from their homes daily, which i believe should not be like that. We want to accommodate any client we are rehabilitating.
“So far in the past few months, we were able to rehabilitate no fewer than 400 persons; therefore we want the State government to please complete the project so that we can accommodate more clients at a time.”
The NDLEA commander said during the month under review, the command had seized over 702.063 kilograms of different illicit drugs and no fewer than 153 suspects.
He said that 25 of the suspects nabbed during the period had been prosecuted while their sentences had been reserved, adding that 72 cases were currently pending in courts.
“During the month under review, we were able to seize 523.978 kilograms of cannabis, 178.322 kilograms of psychotropic substance, three grams of cocaine and 0.3 kilograms of heroin,’’ he said.
Abdul further explained that the command, within the month under review, dislodged 35 drug hotspots within Kano and its environs.
He named the dislodged hot spots as: Gwammaja Secondary school, Dan-agundi, Gwale cemetery, Abdullahi Bayero road, Sabon Gari, and Limawa-Hotoro, among others.
Abdul said the command was building on its new operational approach, which tilted towards apprehending high profile barons, notorious suspects and interception of illicit drugs while on transit.
“Following sustained intelligence, four big sacks were recovered in a truck along Zoo road, each containing four sacks of compressed dried weed suspected to be cannabis sativa (Indian hemp) weighing 300 kilograms,’’ he said.
He disclosed that another method of concealment in trafficking illicit drugs was also unearthed by the Agency during the period.
According to him, this led to the recovery of more than 200 kilograms of dried weed suspected to be cannabis sativa stacked inside jerry-cans.
Abdul also said that within July, the command counselled and rehabilitated three clients, while 75 drug users were referred for brief counselling.
He commended the state government and civil society organisations for their support to the agency.
Top Stories