A Nigerian teenager from Edo state has attained an academic height making her the envy of her mates as 11 universities offer her scholarship. 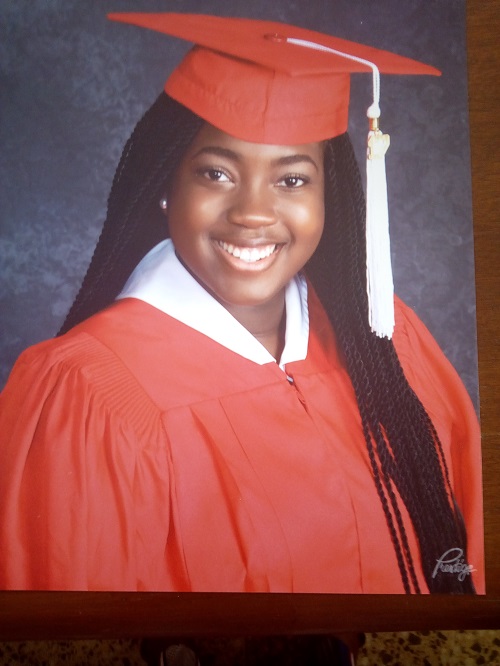 The brilliant 18-year-old Nigerian, Uwade Helen Akhere
An eighteen year old Nigerian, Uwade Helen Akhere, has made history to becoming  the cynosure of all eyes in faraway United State of America, as she won 11 Scholarships  to American Universities to study after emerging tops in her academic pursuit at the Charlotte Catholic High School, according to a report by LeadersNG.
The young Nigerian who hails from Edo State, was the President of the Student Council of the prestigious Charlotte Catholic  High School Charlotte NC, USA. The  2017 Signet II , Volume XXII, graduating compendium of the school shows her coming tops in debate, speech  and Theology,  among others.
Other awards include, National merit Scholarship commendation, the achievement awards for Charlotte Civitan Citizen and Charlotte post top senior  in the class of 2017.
Universities wooing Uwade are Cornell University Tanner Dean’s Scholarship, Hampton University Undergraduate Merit Scholarship, Howard University Freshman Scholarship, Northwestern University Northwestern Scholarship, Northwestern University The 1851 Scholarship and Rice University Trustee Distinguish Scholarship.
Others include, Tulane University offering her  Premier Scholar award, University of Chicago Odyssey Scholar award, University of Chicago Odyssey Scholarship, University of North Carolina at Chapel Hill Morrison Scholarship and Villanova University Villanova Scholarship.
It is worthy to note that the senior Class of 2017 has earned in Scholarship $21,231,383 for their many outstanding accomplishments.
The father of the 18 year old girl, a Law Professor at the Ambrose Alli University, Ekpoma, Edo State, Professor Jim Akhere, a former Commissioner, in the defunct Bendel State of Nigeria while speaking on the feat said it  will not be far from the truth to label her daughter a genius.
He said: “I am so proud as a father and thankful to God for what my daughter has done. She has made the Country proud. It is commendable  that She came out tops in her school, she was the President of the School and won she won  11 scholarship to different American Universities   She has opted for Columbia University, an Ivory league. I am a law Professor, but I don’t think I know as much as my daughter, of whom i  am really proud. She debates, sings, acts and she  is tops in her academics. I’m eternally grateful to the Almighty for the gift of Uwa to humanity."
While urging Nigerian youths to take their academic pursuits seriously Professor  Akhere added that some of the qualities that make for success in life are  hard work, and focus. I do believe that there are those who are gifted, and even these will not get anywhere except they work hard because genius is one percent inspiration and 99 percent perspiration.
The elated academician also urged government to take the education and training of Nigerian youths more seriously, noting that it remain the best legacy any system can bequeath.
“Education is the best and fairest thing that the  best of minds can ever have. Any government that does not take education seriously is not helping humanity. When you are young and you are given to life of acquisition of wealth to the detriment of education then there is a problem, knowledge is everything” He added.
Top Stories