The incident, which occurred on Monday night, destroyed over 20 vehicles, 10 shops and belongings worth millions of naira. 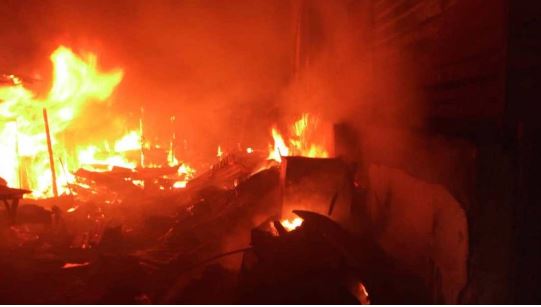 File Photo
Residents of Ikorodu have fled for safety as fire gutted an auto parts market in Owode Onirin, Ikorodu Lagos.
The incident, which occurred on Monday night, destroyed over 20 vehicles, 10 shops and belongings worth millions of naira.
The inferno, which destroyed Line M of the market, started around 9:30pm.
Speaking to The Nations, a business owner in the market, Mr. Wasiu Bello alleged that the fire was caused by the carelessness of a food seller, who left a burning coal in her shop.
Bello lost his shop and belongings to the inferno, alleging that the fire started from the food seller’s shop.
He said he lost some vehicle parts to the fire, a bonnet worth N1.2 million that had been sold, but yet to be taken away by the buyer.
Another victim, Olamilekan Semiu alleged that the night guards had not been performing their duties efficiently. “If they are efficient, they ought to have noticed the fire before it became wild,” he added.
Semiu urged the community’s leaders to take steps to prevent a recurrence.
“New guards should be employed and a security house built close to the line to ensure observation of the vicinity. We will enact a rule that no food seller will be allowed to own shops in the market, because nothing else could have wreaked this havoc if not for their fire,” he said.
An eyewitness accused the Lagos State Fire Service of late response to the emergency call.
“They put out the fire at about 11:30pm after using a full water tank,” he said.
Top Stories