The story has been told of the evil abortion doctor who kept the foetuses of about 2,400 babies in his home and car. 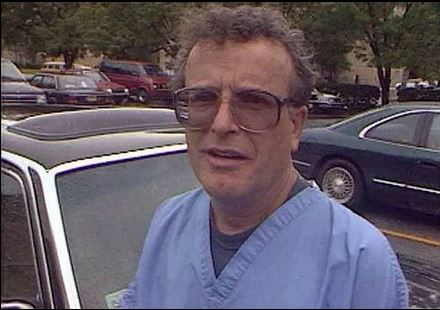 A doctor who “hoarded” 2,400 foetal remains used to compete with another surgeon to see how many abortions he could carry out in a day.

The US Mid-West is in shock after thousands of foetuses were found vacuum-packed in the Chicago home of Dr Ulrich Klopfer after his death last month aged 79.

Questions are now being asked as to why the German-born physician, who performed 50,000 abortions over 40 years, would hoard so many dead babies.

He was a target of weekly protests at his primary clinics in Gary, South Bend and Fort Wayne, Indiana.

Last month, 2,246 sets of preserved foetal remains were discovered stacked floor to ceiling in a garage at his suburban Chicago home.

Weeks later, 165 more sets were found in the trunk of a Mercedes-Benz at a business where Klopfer kept several cars.

There is no indication that the doctor told others about his grim collection, including his wife.

Was a hoarding disorder behind the sinister collection of foetal remains?

Some who knew him recall the German-born Klopfer as a lonely, enigmatic figure.

Unprompted, he would often tell how he took shelter as a four-year-old when Allied planes bombed his hometown of Dresden during World War II.

He would describe emerging three days later with buildings smouldering around him, bodies in the rubble.

News reports about Klopfer going back decades portray him as combative, quick to give the finger to protesters.
For long stretches, Klopfer was the only abortion doctor in the Indiana cities where he had clinics.

Allen County Right to Life went so far as to move its headquarters next door to Klopfer’s clinic in Fort Wayne to turn up the pressure on him.

It was a 1978 Chicago Sun-Times story that first raised questions publicly about Klopfer, recounting the competition between him and another doctor.

A nurse told the newspaper that the other doctor tallied each abortion in pencil on his pant leg.

WAS HE A HOARDER?

If Klopfer saw lots of marks, he would go “like wildfire to catch up,” she said.

Klopfer’s career started unravelling in the 2000s with a flurry of complaints, including that he performed an abortion on a 10-year-old raped by her uncle and did not notify law enforcement.

He complained that conservative state officials were in cahoots with anti-abortion groups to close him down.

But citing shoddy record-keeping and substandard patient monitoring, Indiana regulators took away his license in 2016.

Klopfer had been displaying signs of being a hoarder for years by then.

Kevin Bolger, his widow’s lawyer, went to the Klopfer home after the discovery of the foetuses and said it was impossible to enter some rooms because he had packed them wall to wall with newspapers, old TVs and other appliances.

But Bolger wasn’t convinced hoarding accounted for the collection of foetal remains.

“What kind of a hoarder collects body parts?” he said.

Most of the remains were from abortions Klopfer did in the early 2000s. They were in airtight plastic bags, inside scores of cardboard boxes.

Each bag was labelled with some information, such as the year of the abortion, but officials would not say whether other detail was included, such as the name of the woman.

DID HE BREAK THE LAW?

At the time Klopfer was practising, in Indiana, as in most states still, clinics routinely sent foetal remains to processors that incinerated them along with medical waste.

And because disposing of a foetus in the early 2000s would have cost around $10, maybe he was trying to save on costs.

Whether Klopfer committed a crime in keeping the foetuses is unclear.

A 2016 Indiana law requires that foetuses be treated as human remains and buried or cremated.

It also prohibits the transfer of foetuses across state lines.

But the law wasn’t in effect yet when Klopfer practiced.

And investigators haven’t said if the German-born doctor may have had a financial motive.

Klopfer’s wife is as dumbfounded as anyone about why her husband did what he did and is still getting over the shock, said Bolger.

He said he doubts there will ever be a definitive answer: “He took the answer to his grave.”

The foetuses from the garage have been returned to Indiana, where state officials promised they will receive what anti-abortion groups said they deserved all along: a proper burial.