The story has been told how a black man was subjected to sickening racism at University of Oklahoma.

George McLaurin was the only black student in the midst of over 12,000 whites
He was the only black man in a university of 12,173 whites.
This is the touching story of George McLaurin, the first black man admitted to the University of Oklahoma (OU), and forced to sit in a corner far from his white classmates. But up to date his name remains on the honour roll as one of the three best students of the university.
According to OUDaily, George McLaurin began classes at the university on Oct. 14, 1948, drifting alone, one dark face in a sea of 12,173 white ones.
Oct. 14 was a hopeful moment for McLaurin, the first black student at a previously all-white institution.
“This is a happy day in my life,” he told Sooner Magazine. “If things continue the way they have gone today, I think everything is going to be all right.”
McLaurin fought for admission to OU leading up to that day — when he first applied earlier in 1948, he was denied based on his race. McLaurin went to court with the issue, and in a Sept. 29, 1948, verdict, he was victorious when a federal court ruled that denying him admission was unconstitutional.
The Oklahoma State Regents ordered his admission Oct. 11, 1948, but with this victory, McLaurin was still far from an integrated education — his case was still to undergo another appeal that would not grant him that victory until 1950.
While McLaurin’s exclusion from OU was deemed unconstitutional, segregation at OU was still lawful. Thus, his education at OU was separate and unequal — he learned in a closet looking out over the room where his white classmates sat; he dined at separate tables at separate times; he used a different table in the library to study.
McLaurin, a doctoral student at OU’s College of Education, was not new to the struggles of segregation — at the time he began classes, he was about 61 years old, by the estimates of OU historian David Levy (though Levy said there is contention over McLaurin’s exact age at that point). He had already earned his master’s in education from the University of Kansas and taught at Langston University, Oklahoma’s historically all-black institution, for 33 years.
On OU’s campus, McLaurin’s legacy is being revitalized and uncovered by the very people he fought for.
In 2014, Trey Moore and D’Andre Fisher set out to make OU a better place for young men of color. Moore, now over Oklahoma recruitment for OU’s diversity and enrichment programs, and Fisher, now special assistant to OU Vice President for the University Community Jabar Shumate, began what they then named the Developing Black Males Conference. 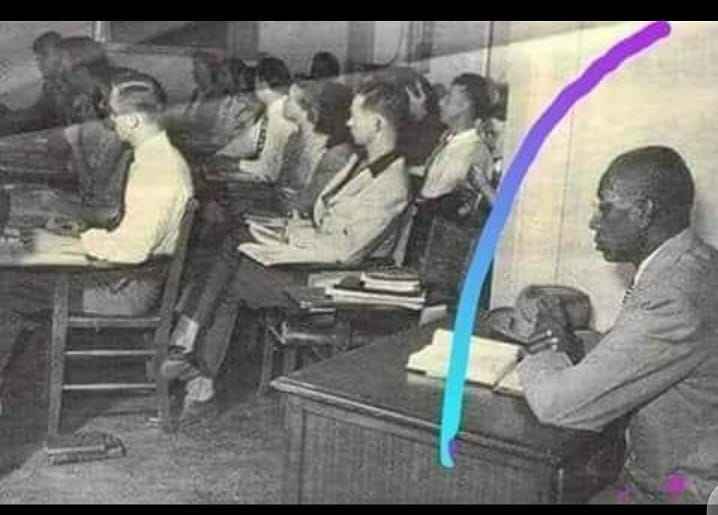 “Doing some research, we found out that the statistics for African-American males attending college was very, very low. … We wanted to put together a program that would assist African-American males and would help them attend higher education,” Moore said. “If they attended OU, great — welcome to OU — but we just wanted them to go somewhere.”
The conference, which was held April 28 through April 30, targets young men facing disadvantages in reaching and transitioning into higher education, and it focuses on recruitment, retention and preparation for entering the professional world, Fisher said.
“A lot of our students that attend this conference come from backgrounds that parents may have never went to college, or … even a rural area of Oklahoma or another small town,” Fisher said. “So them having to really transition from high school to college has been the main focus.”
The conference has grown each year, Moore said — its first students are now graduating or transitioning into graduate or law school, and the conference makes it clear that it welcomes young men from outside the African-American community. The conference sparked a companion event for young women, the Sylvia A. Lewis Women’s Leadership Conference, which honors the first African-American to serve on the OU Board of Regents.
And as of 2016, the conference for men bears a new name: the George McLaurin Male Leadership Conference.
“We talk to them about the importance and the history of people like George McLaurin and Dr. (George) Henderson and Sylvia Lewis and Ms. Fisher,” Moore said. “We talk about the significance that people like that have played in the university and letting them know that they’re standing on the shoulders of giants, and George McLaurin and Sylvia Lewis were just two of those giants that they’re standing on the shoulders of.”
Top Stories