Barcelona will on Saturday tackle Arsenal in a pre-season friendly at the Camp Nou and its expected to be a tough clash. 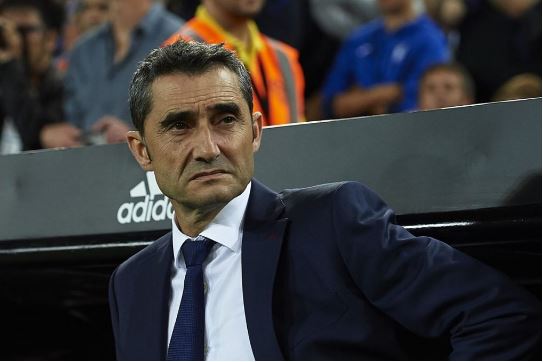 Ernesto Valverde
Barcelona manager, Ernesto Valverde wants the club to sign a left-back and an attacker before the end of this summer’s transfer window.
According to Sport, Valverde also wants the La Liga champions to sell Malcom, Philippe Coutinho, Rafinha and Ivan Rakitic ahead of next season.
The Spanish newspaper is reporting that Valverde’s side are already in talks with Real Betis for their left-back, Junior Firpo.
It was reported that Malcom, Coutinho, Rafinha and Rakitic are among the ten players Barcelona placed on their transfer list.
Valverde’s side have already signed Antoine Griezmann, Frenkie de Jong and Neto in this summer’s transfer window.
Barcelona will on Saturday tackle Arsenal in a pre-season friendly at the Camp Nou.
Top Stories