An obviously elated groom has stunned people with his very interesting dance steps during his wedding. 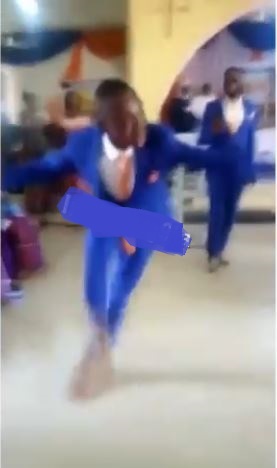 The groom dancing
A video has emerged online showing the moment a groom stunned people with his dance steps during his wedding.

The man who is yet to be identified, was apparently so elated that he was getting married that he put the rather 'crazy' display in church.

In the video, the groom is seen wearing a blue suit and surrounded by other persons including his bride. He then goes into frenzy, dancing very excitedly and even standing on his hands at some point.

During this time, the entire witnesses are heard cheering for him and spurring him on as he continues his display.

The incident is said to have happened in Zaria, Kaduna state.