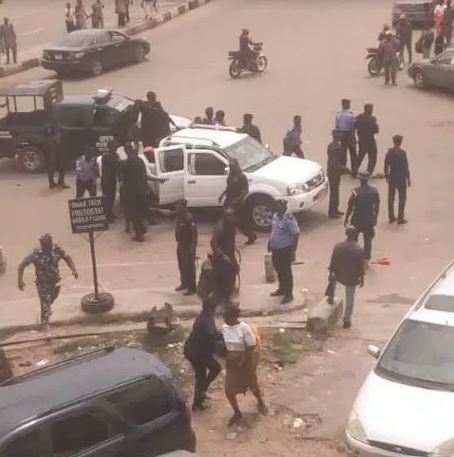 The police on Monday brutalised a 70-year-old poor woman hawking Fufu, Sariyu Akanmi, during the protest of Revolution Now in Osogbo, the Osun State capital.

The woman was said to be passing by where the protest was going on when the police attacked and brutalised the woman.

It was gathered that the police hit the woman with the butt of their gun, kicking her on the floor while trying to throw her inside their waiting van.

But the intervention of the people prevented them from arresting the woman.

The police also arrested about ten of the protesters, beating them as they kicked them into the vans.

Before leaving, the police led by one Adebayo Olawale sprayed tear gas on journalists, who were covering the incident and drove dangerously out of the scene.

Earlier, men of the State Security Service and the Nigeria Police Force prevented members of the Coalition for Revolution in Osun State from protesting against alleged suffering of Nigerians under the Buhari administration.

The protesters, mainly students of the Obafemi Awolowo University, the Federal Polytechnic, Ede, the Osun State Polytechnic, Iree and other public tertiary institutions in the state, had gathered at Olaiya junction in Osogbo, the state capital around 9.00 am to sensitize Nigerians about the “deplorable conditions prevalent in the country under the watch of the President Buhari.”

The students that joined other Nigerians across Nigerians in a peaceful protest called for revolution to stem the tide of spate of joblessness, insecurity, hunger, modulated workers salary and “fraudulent implication of the Contributory Pension Scheme in Nigeria.”

Singing solidarity songs and carrying placards with various inscriptions, they lamented suffering of Nigerians in the face of “estimated electricity billing and epileptic power supply, destruction of farms by herdsmen, the inconsiderate and insensitive levies being imposed on our artisans, Okada riders, commuters, drivers and traders in the state. We hereby maintain that we have inalienable, constitutionally and fundamental human right to peacefully protest the inadequacies.”

But the security agents prevented the protesters’ further movement to other parts of the town.

For hours, the armed security agents, including the SSS, the police and the Nigeria Security and Civil Defence Corps kept the students under watch and would not allow them to move out of Olaiya from the students were singing solidarity songs against the Federal Government.

Some of the students, who used the Public Address System to speak to passers-by, demanded unconditional release of Omoyele Sowore, the convener of the Revolution Now from the custody of the State Security Service.

The said: “We call for an economy that works for all banks and foreign multinational. For effective and democratic end to insecurity and insurgency. An end to systemic corruption and total system change in the interest of all.

“We also demand immediate implementation of N30, 000 minimum wage. The immediate stop to the illegal and fraudulent Implementation of Contributory Pension Scheme and prompt investigation and resolution scheme.”
Top Stories