Maguire was bought from Leicester City as the world's most expensive defender, for an 80million pounds fee. 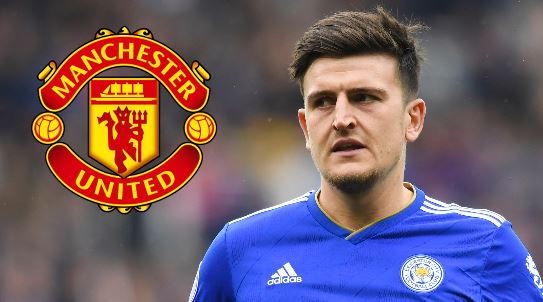 Harry Maguire
Manchester United new signing, Harry Maguire, will wear the No. 5 shirt at the club.
The player has completed a medical and joined Man Utd from Leicester City.
He is Ole Gunnar Solskjaer’s third transfer of the summer.
Maguire will wear the No.5 shirt left by legend Rio Ferdinand.
Maguire was bought from Leicester City as the world’s most expensive defender, for an £80million fee.
Bryan Gunn, who works for the agency Triple S, tweeted that Maguire would take the No.5 shirt and the agency also confirmed it on their website.
Upon signing for United, Maguire said: “I am delighted to have signed for this great club. I have thoroughly enjoyed my time at Leicester and would like to thank everyone at the club, and the fans, for their fantastic support over the past two seasons.
“However, when Manchester United come knocking on your door, it is an incredible opportunity.
”From my conversations with the manager, I am excited about the vision and plans he has for the team. It’s clear to see that Ole is building a team to win trophies. I am now looking forward to meeting my new team-mates and getting the season started.”
Top Stories