Two Chinese men have been arrested by the police in Lagos for allegedly operating an illegal e-waste factory said to be emitting toxic waste into the environment. 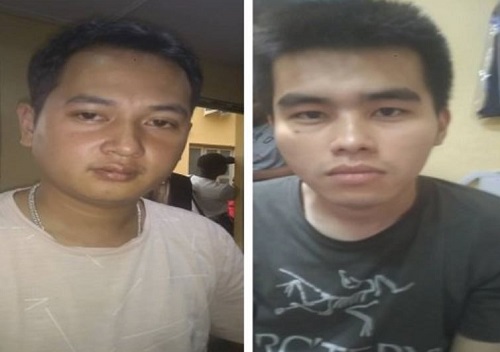 The police have arrested two Chinese for operating an illegal factory dealing in electronics waste in the Ikeja area of Lagos.

It was gathered that men of the Area ‘F’ Command invaded the factory located at No. 19 Sule Abuka Street, Opebi, Ikeja, which had no signboard, and arrested the suspects with several cartons of the waste already billed for export to China and Vietnam by air cargo.

According to a police source, the suspects, Lin Piehao, 22, and Li Ruoneng, 27, are also staying in the country with expired visas.

The source added that the arrest was made following a tip-off on the activities of the Chinese.

“We got a tip-off on their activities and we went to the factory to arrest them. We also discovered that the two brains behind the company were staying in Nigeria illegally. They came to Lagos in May and they were issued one-month visas, but they exceeded their stay and were working in Nigeria illegally,” the source added.

One of the suspects, Piehao, said, “We buy phone panels from phone repairers and scrap sellers. We remove the panels’ IC with a machine and then ship it to China and Vietnam.

“We have some Nigerian casual workers in our factory, but we gave them the rules and asked them to be discreet about what we do before they joined us.

“We actually came to Nigeria with one-month visas to explore the country and know the business we can do, but our boss in China urged us to open the factory and we have been enjoying Nigeria and do not want to go back despite the expiration of our visas.

“I don’t have a work permit; I know it is a crime to work without a work permit, but the electronics waste business is very lucrative. We do a lot to ensure that the smoke from the factory does not affect the environment in which we operate.”

He stated, “We have two Chinese in our custody; they are operating the factory illegally, because they actually registered a business, but the purpose for which it was registered is different from what they are using it for now.

“They are emitting poisonous gases, polluting the environment and disturbing the neighbourhood. Investigation into the matter is ongoing.”
Top Stories