A man and his girlfriend have fallen to their deaths from a bridge while they were kissing publicly. 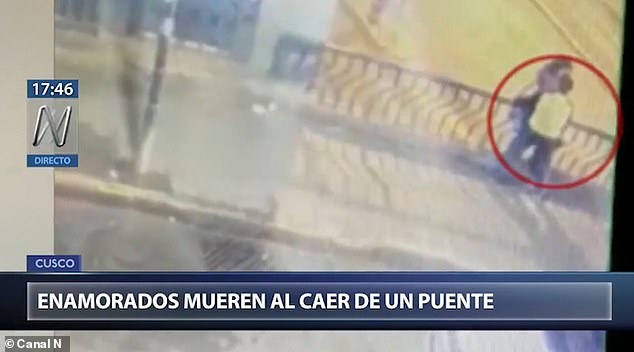 A couple locked in a passionate embrace tragically fell to their deaths after a night out in Peru.

Maybeth Espinoz and Hector Vidal had been on their way home from a nightclub in Cusco last Saturday when they tragically plunged 50ft off the Bethlehem Bridge.

The horrific moment was caught on CCTV.
Maybeth and Hector had stopped on the bridge to kiss after leaving a nearby nightclub just after 1am, according to local media.

Disturbing footage shows the couple leaning against a railing on the bridge, while hugging and kissing each other.

Maybeth, 34, proceeds to sit on top of the metal railing and wrap her legs around Hector, 36.

However she appears to lose her balance and begins to fall backwards, taking Hector with her.
The couple desperately tried to cling to the barrier but were unable to stop themselves from falling off the bridge.

Maybeth was killed outright, while Hector sustained a fractured skull and later died in hospital.

According to Panamerica, the couple were mountaineers who had moved to the Cusco region to work as tour guides.

Their bodies have since been transferred to Ancash in northern Peru.
Watch the videe below:
***
Source: Daily Mail UK
Top Stories