However, his arrest by personnel of Department of State Services, DSS, was announced in the early hours of Saturday. 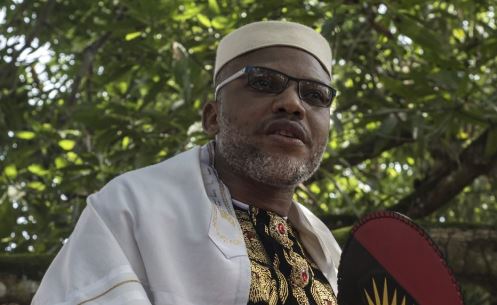 Nnamdi Kanu
Leader of the Indigenous People of Biafra, IPOB, Nnamdi Kanu, has attacked President Muhammadu Buhari, the All Progressives Congress, APC and its national leader, Asiwaju Bolaji Tinubu over the arrest of ‘Revolution Now’ protesters, calling on the Yoruba race to take decisive action now or allow Sowore to rot in jail like Sambo Dasuki.
DAILY POST had earlier reported that Sowore, the presidential candidate of the African Action Congress, AAC in the February 2019 election, had called for a nationwide protest against what he described as bad governance.
The protest he tagged “Revolution” Now was planned to take place on Monday, August 5.
However, his arrest by personnel of Department of State Services, DSS, was announced in the early hours of Saturday.
Also, following an attempt by protesters of Revolution Now to shutdown the Benin-Ore highway during the protest, a journalist, as well as one of the protesters, were arrested by armed security agents in Ondo State on Monday and this was repeated in most cities where the peaceful protest held.
But Nnamdi Kanu, in a statement to DAILY POST on Wednesday, wondered why Buhari, Tinubu and others who led a protest against the government of Goodluck Jonathan in 2014, would arrest Sowore and his supporters.
Kanu, who is still being wanted by the Nigerian authorities, said, “Below are your typical British created Nigerians, the worst set of people you could ever possibly encounter.
“Full of unbridled self-hate, stupendous ignorance, hypocrisy oozing from every pore in their decrepit body and filled with unimaginable wickedness.
“This same set of people now in Aso Rock and their media friends that came out on the street to march, protest and call for #Revolution against President Jonathan in 2014 are today the same bunch of despicable reprobates against any form of lawful dissent, protest or revolution against their regime.
“This is not only laughable but an affront to decency, justice and fair play. Apparently, the occupants of Aso Rock is telling the world they can call for a revolution and street protest against a sitting president i.e. Jonathan, but nobody is allowed to protest against them.
“Pathetically, some of these poorly educated fellows from their ‘presidency’ come on their national television to shamelessly provide a flimsy defence of what is clearly indefensible.
“The same thing late Buhari did in 2014 by openly calling for a revolution and organising nationwide street protests with the likes of Bola Ahmed Tinubu against the democratically elected government of Goodluck Jonathan is now a treasonable offence under their rule.
“Even going by the cringe-worthy standards of the most hopelessly backward Banana republic on this earth, the detention of Sowore for doing exactly what late Buhari did is a new low for the Zoo.
“Why didn’t Buhari, Abba Kyari, El-Rufai, Tinubu et al wait for the election of 2015 to remove Jonathan before embarking on their 2014 Revolution as they are now sanctimoniously preaching? Why did they take to the streets in protest, an action they themselves openly tagged a revolution, before an election?
“The only language this Abba Kyari led Fulani Jihadi cabal in Aso Rock understand is consistent mass action and civil disobedience. IPOB has done and is still doing it and so too the Shiite.
“What the Yoruba nation and every conscientious person must do now is to rally round Omoleye Sowore to ensure his release or else he will be another Sambo Dasuki detained indefinitely with no constituency to mount pressure on his behalf as IPOB did in my case and Shiite (INM) for Sheikh El-Zakzaki.
“#RevolutionNow is a laudable initiative and must be commended by all lovers of freedom. What Sowore did in calling for a revolution in Nigeria is the highest form of bravery. Protests should continue and if need be intensified, especially in Yorubaland, until Omoleye Sowore is set free.”
Top Stories