Dancing With The Dead: Meet The Chimbu Skeleton Dancers (Photo)


The story has been told of the Chimbu or Simbu tribe of Papua New Guinea and their 'skeleton dancers'. 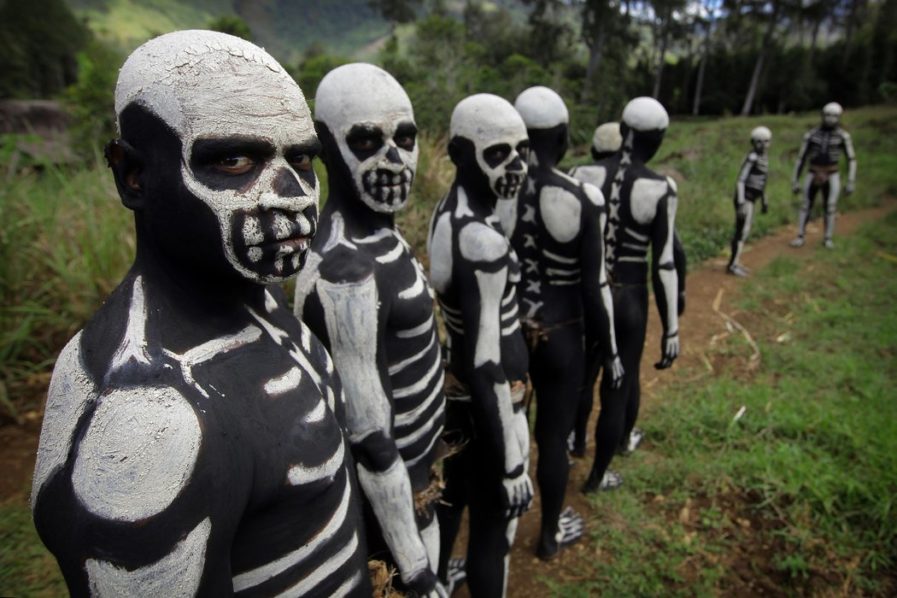 Chimbu Skeleton Dancers
There are quite a number of indigenous tribes around the world with their peculiar cultures and practices which may seem queer to an outsider.

One of such tribes is the Chimbu (or Simbu) of Papau New Guinea whose Province is located in its central Highlands. The term “Chimbu” was given to the people by the first Australian explorers in 1934 who heard the word “simbu”  (an expression of a pleasant surprise in Kuman language) exclaimed by the locals when they first met.
One of the things that set the Chimbu tribe apart from others is their skeleton dance which originated to intimidate enemy tribes in what is a hotly-contested and highly-territorial country. It also expected that the enemy tend to believe they are not human and have some source of supernatural power.

The Chimbu tribe are so remote that little is known about their real lives, but it is understood they live in a temperate climate in rugged mountain valleys between 1,600 and 2,400m, traditionally in male-female segregated houses but increasingly sharing as families.

However, the slowly increasing tourism attraction and interaction therefore means that the dances or ritual are starting to be done more as shows by community-integrated people, than by the more remote in a traditional setting.