A woman who uses urine therapy to keep her skin glowing has shared her experience. 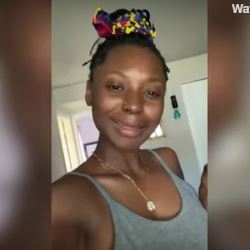 Ruby Karyo
A woman from the U.S. Ruby Karyo has said that drinking her morning pee twice a week makes her skin glow and her complexion fairer.
Karyo said that she has been drinking her own pee and rubbing it on her face for over a decade.
She claimed it improved her skin and overall health and she has been doing so since she was 19 years old.
The 30-year-old mum said her dad introduced her to ‘urine therapy’ when she was just 19 and it had been working well for her.
Ruby splashed the pee on her face and used it as a moisturiser, claiming it helped her get a glowing complexion.
Watch her in the video below:
Top Stories