How Rev. Fr. Offu's Bank Account Was Emptied Just 25 Minutes After His Death


A Catholic reverend father who was killed by gunmen has had his bank account cleaned out just 25 minutes after his murder. 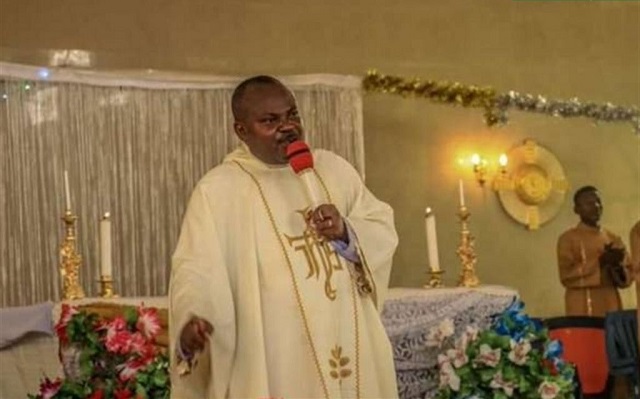 Rev Fr. Paul Offu
According to a report by Daily Trust, less than 25 minutes after unknown gun men shot dead the Catholic Priest, Rev Fr. Paul Offu last Thursday, his bank account was emptied by a yet to be identified person who was said to have made frantic and frequent withdrawals until the last money was withdrawn, according to a reliable source working in an old generation bank (name withheld) where the late cleric operated an account.

The inside source informed Daily Trust that considering the time of Offu’s murder and when the withdrawal was made, “it makes one to wonder how fast the killers (assuming they actually made the withdrawal) were able to rush to the bank and withdrew all the cash,” asking rather angrily: “Who was, indeed, responsible for disclosing the pin number of the priest ATM?”

According to the source, who argued that, while she was not holding brief for those that killed the priest, “there was need for the security operatives to look inward and ascertain who actually did the withdrawals from the murdered priest bank account shortly after he was killed.”

She said that the inbuilt camera in the ATM would likely capture the face of the person apparently without the individual knowing it.
“It is not certain that the person or persons who made the quick withdrawal from Fr Offu’s bank account destroyed the camera before operating the ATM. So the police could exploit this angle and make sure they leave no stone unturned in their investigation,” she said.

Fr Offu was shot dead, while a commercial driver, Mr. Kenneth Igwe, who was said to have encountered the gunmen while in the operation,   was kidnapped by the gun men that quickly disappeared into the bush. But Igwe’s decomposing corpse was later found in the bush by security forces on Monday.

However, the security operatives have mobilized and begun a manhunt for the killers. The State police spokesman, SP Ebere Amaraizu said that the police would fish out all those who were involved the crime and make them face the law.
Top Stories