The protest took the students to the MTN office in Oke-Ilewo; a branch of MultiChoice DSTV and locked up both offices. 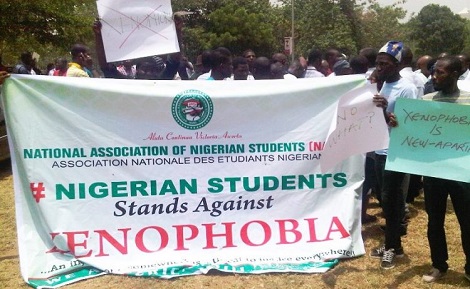 The other offices picketed were MultiChoice DSTV and Stanbic IBTC branch, all in Oke-Ilewo, Abeokuta.

The protesting students led by National Public Relations Officer of NANS, Azeez Adeyemi carried placards with different inscriptions such as “South Africans have declared war; Enough is Enough; Nigerian Students can no longer keep quiet while South Africans kill Nigerians and All South African business interests must leave Nigeria now among others.

127 Nigerians have been reported to have lost their lives over the years as a result of xenophobic attacks in South Africa.

The protest took the students to the MTN office in Oke-Ilewo; a branch of MultiChoice DSTV and locked up both offices.

Attempts to lock up the Stanbic IBTC branch in the area was rebuffed by both the management staff and security personnel attached to the bank while some policemen in five Hilux vans from zone 2  Area Command were deployed to ensure the protection of lives and property.

Addressing newsmen in the front of the affected bank, Adeyemi said their action would send a strong signal to the South African government over the xenophobic attacks on Nigerians.

The NANS PRO said the students’ body could no longer fold its arm and watch Nigerians being killed in South Africa.

He said, “The protest will cut across all the states of the Federation.”
Top Stories