Three Nigerian men have been caught hiding inside a ship which was headed for Europe from Lagos. 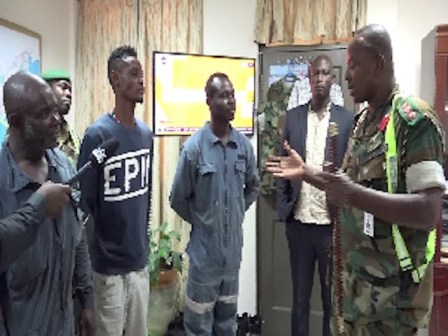 Tema Port security manager Joseph Punamane, right counsels the Nigerian stowaways
According to PM News, three Nigerians desperate to reach Europe by all means hid in a Europe-bound ship that departed Lagos port. But the Nigerians had their plans scuttled when they were discovered on board the ship at Ghana’s port of Tema.

The unidentified Nigerians, according to Ghana News Agency, said they boarded the ship separately, all united in the mission to seek greener pastures in Europe.

Two of the stowaways said it was not their first time, trying to sail to Europe illegally. They had made it before, but were deported home.

The Port Security Manager, Joseph Punamane said the Nigerian stowaways would be repatriated to Nigeria.

He advised the stowaways to discontinue embarking on such illegal voyages, citing many instances where failed attempts have led to extreme injuries and sometimes deaths.

“I think some of them are just desperate even though they know they will die,” he said.
Top Stories