The Toffees signed Iwobi to a five-year contract for a fee of 40million pounds after he made 149 appearances at the Emirates Stadium. 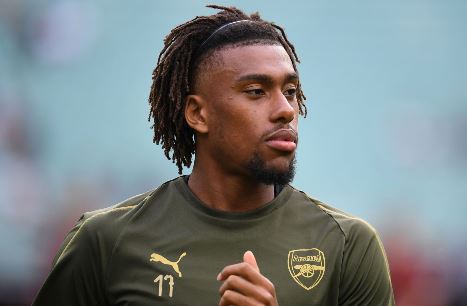 Alex Iwobi
Alex Iwobi has bid an emotional farewell to Arsenal following his deadline-day move to Everton.
The Toffees signed Iwobi to a five-year contract for a fee of £40million after he made 149 appearances at the Emirates Stadium.
Iwobi became Marco Silva’s seventh signing after Jonas Lossl, Djibril Sidibe, Andre Gomes, Fabian Delph and Jean-Philippe Gbamin and Moise Kean.
The Super Eagles attacker spent 17 years at the North London club and expressed his gratitude to former manager, Arsene Wenger, who gave him a chance.
“I grew up dreaming of playing for Arsenal, following in the footsteps of some of my heroes. I’m proud to say that at 23, I’ve achieved one of my dreams.
“From playing for Arsenal kids to 149 appearances, it was a honour to play for the club I supported as a boy.
“I’ve enjoyed every minute of it. So many people to thank, far too many individual names to mention but I thank you all!
“So many great moments, from scoring my first goal at the Emirates to scoring my last goal in Baku, you’ve played a big part in my 17 fantastic years.
“Special thanks to the fans, my teammates, the support staff, my coaches Arsene Wenger and Unai Emery who put faith in me and gave me the opportunity to grow as a player and a man.
“Big love to a special club. Arsenal will be forever in my heart,” Iwobi wrote on Instagram.
Top Stories