When Ruiz voiced his displeasure in heading to the United Kingdom, a different direction was taken as Hearn and Joshua have sold Saudi Arabia as a neutral location. 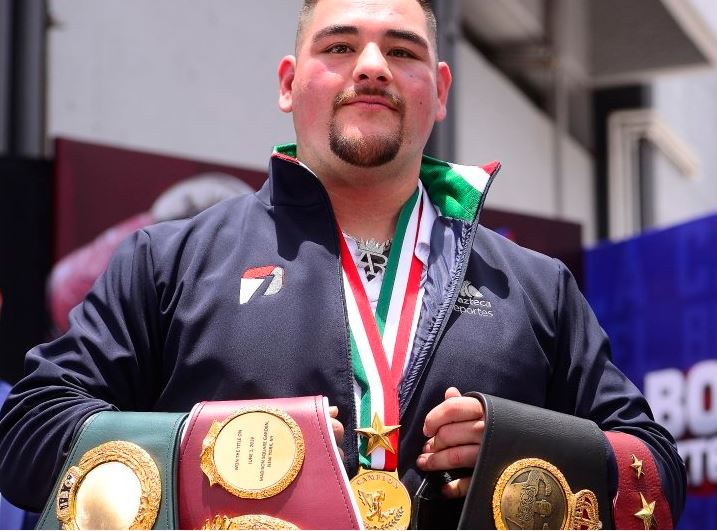 Andy Ruiz
The reigning unified heavyweight titlist continues to thrive in the aftermath of his upset knockout win over England’s Anthony Joshua this past June at Madison Square Garden in New York City.
The first-ever Mexican boxer to win a heavyweight title has been celebrated on both sides of the United States/Mexico border, with either country remaining his hosting preference for a contractually-bound rematch.
Instead, the word from Joshua and promoter Eddie Hearn is that part two is set for Dec. 7 at a yet-to-be-erected venue in Diriyah, Saudi Arabia. News of the location was met with immediate and vocal reaction, a considerable amount negative but none of it involving the defending titlist himself.
At least until now.
“I know everyone is talking about the (second) fight and all that,” Ruiz (33-1, 22KOs) noted on Tuesday through his verified social media channels. “We got the real news coming soon, but the fight is gonna happen soon.
“AJ got the rematch, yes we do got the rematch. But it’s gonna be on my term(s)… on our term(s). We’re gonna bring it back here in the United States.”
The insistence from Hearn throughout the two-month process of securing a location is that he and Joshua (22-1, 21KOs) were in full control over when and where the rematch would take place. Such were the terms of the contract agreed to and signed by Ruiz Jr. and his handlers, including TGB Promotions’ Tom Brown, representing the heavyweight on behalf of Premier Boxing Champions (PBC).
Ruiz accepted the fight with Joshua as a late replacement for Jarrell Miller, who tested positive for multiple banned substances during random pre-fight testing. Joshua welcomed the new challenge with open arms, only to endure a U.S. debut to forget. Ruiz recovered from a 3rd round knockdown to score four of his own in registering a 7th round stoppage.
The first fight was presented by sports streaming platform DAZN, which angled for the hotly anticipated rematch to take place in the U.S. to help bolster its subscription base. Joshua and Hearn instead ruled out a stateside return, leading many to believe the fight would land at Principality Stadium in Cardiff, Wales.
When Ruiz voiced his displeasure in heading to the United Kingdom, a different direction was taken as Hearn and Joshua have sold Saudi Arabia as a neutral location for both parties, despite their being in full control of the promotion.
As much is recognized by Ruiz, who acknowledges the rematch will happen—just on more agreeable terms.
“AJ… He’s scared. Hell yeah, why do you think he’s over there, trying to make the fight in Saudi Arabia,” insists Ruiz Jr., whose lone career loss came in his first title bid, falling just short versus Joseph Parker in their Dec. 2016 vacant title fight. “Like I said, I don’t have no protection over there.
“Look, United States of America wants to… never mind, I can’t say nothing. But… the fight is gonna happen soon.”
Top Stories