It was Liverpool goalkeeper, Adrian that saved Tammy Abraham's penalty to ensure victory for the Reds. 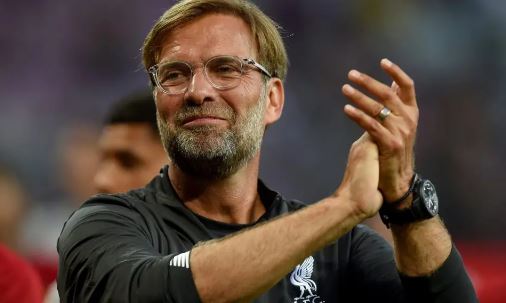 Jurgen Klopp
Liverpool manager, Jurgen Klopp has praised Chelsea after the UEFA Super Cup clash in Istanbul on Wednesday.
Frank Lampard’s Chelsea side ensured the game went into penalties at the home of Besiktas in Turkey.
It was Liverpool goalkeeper, Adrian that saved Tammy Abraham’s penalty to ensure victory for the Reds.
The Reds had to come from behind in the game, with Olivier Giroud opening the scoring for the Blues in the first half, and Christian Pulisic having a goal ruled out for offside.
Senegalese forward, Sadio Mane then equalised for Liverpool shortly after the restart, with Mason Mount having a goal ruled out at the other end as the game went to extra time.
Liverpool then took the lead for the first time early on in extra time, with Mane again on target for the Reds.
But Chelsea equalised from the penalty spot, with Jorginho converting after Adrian had been adjudged to have fouled Tammy Abraham.
That sent the game to a penalty shootout, which Liverpool won 5-4 as Adrian denied Abraham from the spot, giving the Reds victory.
Klopp praised Chelsea for their efforts in the game, three days after the Blues had suffered a 4-0 defeat at Old Trafford against Manchester United in their Premier League opener.
“It feels big, to be honest. It was a very difficult game for both teams and it’s about winning it at the end, so all good,” Klopp told post match press conference.
“We showed character, Chelsea showed character as well so it was like boxing. Proper knocks from both sides.
“I think that nobody in the stadium wanted twice fifteen minutes [at the end]. I think the last 15 minutes was really a killer. But that’s how it is. We came through. I’m not sure about the penalty. That’s it.
“A really good Chelsea side. We had good moments. We started well, then we dropped too deep. We couldn’t hold our football. It made no sense. But it’s really early in the season. It was already our third competitive game without a pre-season. So, we have to fight.”
Top Stories