A Nigerian woman arrested for assaulting and locking a 10-year-old boy inside dog cage has confessed why she did it. 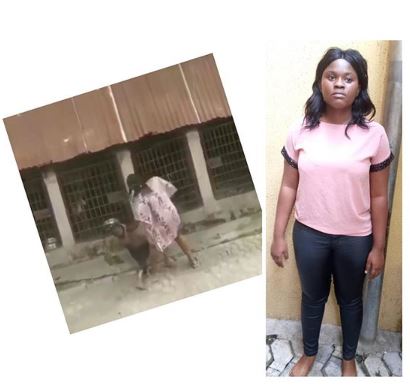 Onyinye Mbadike
.
A 24-year-old lady, Onyinye Mbadike, who was arrested by the Lagos state police command over the viral video showing her assaulting and locking a 10-year-old boy, Chibike Eziamaka, in a dog’s cage, has opened up.
Spokesperson of the state police command, Bala Elkana, said Chibike, who is an orphan, was brought to Lagos by his aunt who is Onyinye's mother.
The suspect told the police that she dehumanized the victim because he was misbehaving after drinking a liquor in their refrigerator.
According to her, Chibike smashed her car’s side mirror with a stone, at their No 7 Trimnell Street, Aguda, residence.
Onyinye revealed that she only locked him in an empty dog kennel for few hours before bringing him out. The boy has since been rescued and taken to a secured shelter while the suspect will soon be charged to court.
Top Stories