Too Sad! Obituary Photo Of Four Family Members Who Died Of Food Poisoning In Ebonyi state


It is a sad time for a family after losing four members who died of food poisoning. 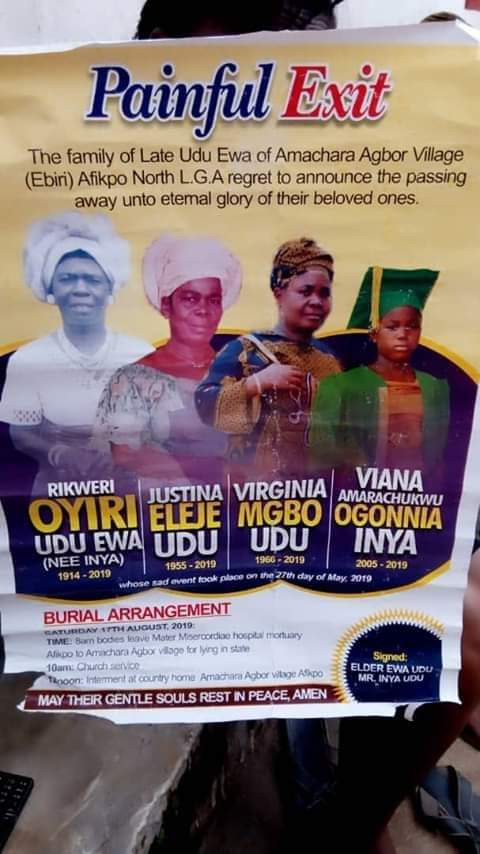 The photo
Four family members who died as a result of alleged food poisoning at Amaechara village in Afikpo North Local Government Area of Ebonyi State, will be buried on Saturday, 17 August, 2019.
The incident happened in May 2019, after the four victims had their dinner which was suspected to have been poisoned. Their bodies were deposited in the mortuary at Matter Hospital in Afikpo North.
The deceased include a 100-year-old woman Rikweri Oyiri Udu Ewa, who was found lifeless in the toilet. Others are Justina Eleje Udu, Virginia Mgbo Udu and the youngest Amara Ogonna Inya.
Confirming the incident when it happened, spokesperson of the Ebonyi State Police Command, DSP Loveth Odah said the four died mysteriously after taking their dinner.
“The death of the said persons was as a result of food poisoning. A family of four at Amaechara village at Afikpo North LGA was discovered dead on their bed inside their room. We sent a team of police officers to the area and discovered that the said family of four ate their last meal and gave up; this include an aged woman of about 100 years. Another was the first daughter of the 100 years old mother, a retired teacher who was found dead in the living room. Also, was the second daughter who recently lost her husband and the maid whose body was found in the kitchen,'' Odah said.
Top Stories