A bus has caught fire in a community in Lagos state, causing some serious stir in the area. 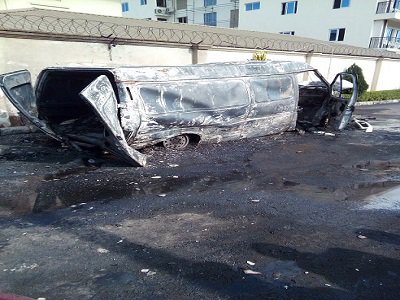 The bus
A bus, which came to supply diesel to Greenville Schools, GRA, Ikeja, on Thursday caught fire, The Nation reports.

Thick smoke enveloped everywhere, as residents tried to put out the inferno.
Lagos State Fire Service officials later came after residents had tried in vain to put out the fire using extinguishers.

Policemen were on the scene, as residents trooped out to either help or watch.

There was no casualty.
Top Stories