BBNaija: Why Mercy Doesn't Want To Have S*x With Ike Yet


Mercy has expressed her reservations about having s*x with the US-based Ike as she fears the 'gangster' might abscond. 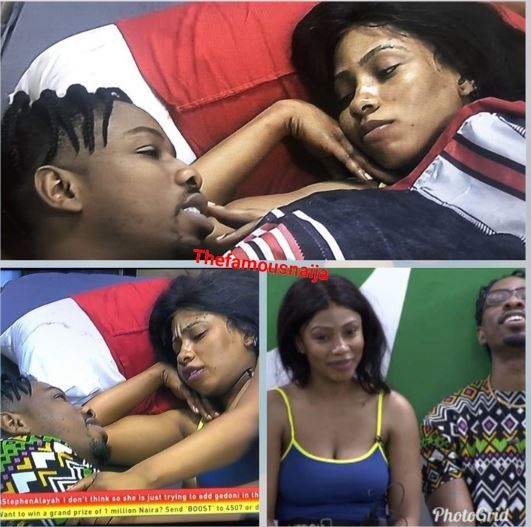 Ike and Mercy
Mercy doesn't want to have s*x with Ike for now. She thinks Ike will 'chop and go and clean mouth' after the s*x.
According to MizzD who monitored the BBNaija couple in bed while they were discussing:
Ike wants to take it to the next level with mercy. With what he has experienced with mercy so far, he's ready to make it work with mercy outside the house but he's not sure about mercy. He said the only but may be bad s*x, but he feels its still not a deal breaker.
Mercy is not ready to open her legs for him and she mentioned that a typical Nigerian guy loses interest the moment he gets into the girl's panties. Ike said he'd wait.
His last relationship was four years but he says he doesn't want to go into the details, although both of them were not ready to get married.
The ex is black but not Nigerian, so his parents wouldn't have agreed to him marrying her. He said she's been to jail a couple of times and was also pregnant at some point in the relationship but they both were not ready for kids. Said she loved money but was too lazy to work, so whatever money he makes from the streets, he gives to her but she still seeks more from her sugar daddies and it felt like they were in a competition.
Mercy asks if he has ever made a girl feel he likes her, only to move on after the first s*x. Ike says its normal level, but most times it's not that he leads them on. Usually, after a first date, they have s*x and s*x is bad, he'd fake it but he wont just ditch or block them. He keeps them as friends.
Ike says he doesn't chase heavily, he just says a few words here and there and if he eventually has s*x with them and it's bad, he wouldn't block them, but if the girl goes crazy, he'd tell her to calm down.
Mercy says they will wait one year because Ike is a bad guy. She says Ike has sweet mouth, and ike replies that mercy has sweet everything cheesy.
Mercy is still worried that Ike will leave after having s*x with her because Ike has said he doesn't chase girls, its vice versa. But Ike tells her that she is different because he loves her.
Watch the video: