A notorious Malaysian thief has been caught redhanded begging after he was caught stealing from Nigerians. 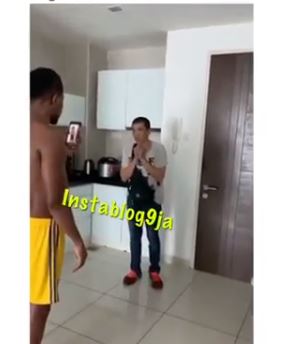 The thief after he was caught
A Nigerian man has cried out after a notorious Malaysian thief attacked his friends in the country.
The man who shared the video narrated how they caught the Malaysian thief who had broken into their house after destroying the keyhole.
He wrote: "This Malaysian thief burst my friend's house. We were expecting the police, only to see a popular thief ripping off Nigerians".
Watch video below:

Suspected Malaysian thief robbing Nigerians, seen begging after being caught in the act