A young woman who was dumped at the altar by her fiancee on their wedding day, has recalled her humiliating experience. 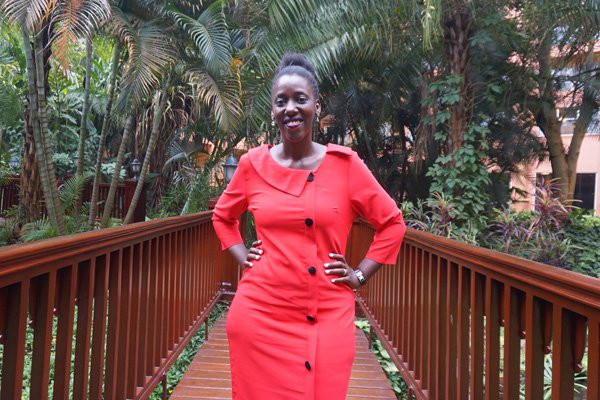 Jenny Mutale
A Rwandan woman Jenny Mutale has opened up on how she found courage after being dumped at the altar by her fiancé, second chances and finding love again.

Speaking to Ugandan journalist, Phionah Nassanga, Mutale recalled how she was clad in her beautiful Cinderella white gown with a bouquet of roses, on February 25, 2017, excited about making the vows with the man she thought was the love of her life.

But her fiance never showed up.

“I called my fiancé’s phone countless times, but it was off,” she recalls. I proceeded to church, with a lot running on my mind. I kept hoping that he was delayed somewhere or his battery was off. I was convinced he would make it. I asked to be alone. I believe that something could ruin the most beautiful day in every girl’s life- the wedding day. I started praying and meditating on some scriptures. After 30 minutes of waiting, I got the courage to walk to church. The pastor went on to preach words of encouragement to the congregation. As the choir sang, my guardian walked me down the aisle.”

"Too many thoughts engulfed me. I wanted to cry but I thought crying would not bring my fiancé to church. Just when I thought my life was getting a whole new meaning, my wedding day got ruined. I did not know what to do,” Mutale recalls.

Mutale and her ex-fiancé had first met at a prayer gathering. And as he was ministering, he crushed on her. Before they knew it, they had become good friends.
Promising to stand by each other’s side, Mutale and her ex-finance decided to make things official both at the church and to the parents. She knew she had found a shoulder to cry on. Unfortunately he wasn’t the one.

Mutale’s father died in a motor accident at the Uganda-Congo border when the last born of four siblings was still an infant. Mutale says her mother, who was in the same car with her father, also suffered an acute spinal cord injury and passed on too.

“I was only five years old,” she recalls.

Raised by relatives, Mutale says no one seemed to like her. Tired of being shouted at, denied access to toys, stopped from playing with other children, harrowing words of failure, the little girl decided to leave home. Homeless, roofless and almost forgotten, she existed only on the fringes of Kigali. Unsure of where to spend the night, every evening Mutale found solace in different bars.
After losing her identity, with no one to call mummy or daddy, Mutale joined a group of peers who introduced her to smoking and drinking alcohol.

“I was introduced to drugs at 12. The first time I got high, I forgot about all the misery I was going through at the moment” she recalls.

For every sip and puff she had every single day, Mutale did not know that she was slowly slipping into a ditch of addiction. She says cleaning bars and miming songs earned her some pennies to buy cigarettes and alcohol.

Though it’s hard to recall the exact year it was, Mutale says she was later taken off the streets by a Muslim family.

“One night, a woman approached me, asking who I was and why I was on the streets. After listening to my story, she decided to adopt me,” she recalls. But in her new home, Mutale was not liked by everyone, except the caretaker. “I was molested, but feared telling anyone because no one believes stories of a street child,” she says.

She got the opportunity to resume school but even then she could not give up on drugs. Sneaking packets of vodka and cigarettes into school, Mutale was always ‘high’. When her caretaker passed away, she became homeless again and dropped out in Senior Four. At this point, she contemplated committing suicide.

“I took about 60 tablets. I wanted to die and bring an end to all this misery. I relapsed into coma,” she recalls. “But the most depressing time was when I got back to my senses on a hospital bed. You would think someone is more depressed they decide to commit suicide, but it’s more depressing when you realise you are still breathing.”
Tired and confused, Mutale left her ancestral home and crossed to Uganda. One morning, Mutale boarded a bus to Uganda, set to settle in a country where she knew no one.

“Out of desperation, running away was the only option for me.” she said.

She travelled for hours without eating anything. The lady who was seating next to her got concerned and asked who she was. “Where are you going? What is your name?  What are you going to do in Uganda and do you know anyone there? She asked me all these questions but I had no answer.”

The bus arrived in Uganda in the evening and they both parted ways. But Mutale wasn’t sure of where to go until she was picked by other strangers.

“They first asked me if I knew how to dance Kinyarwanda. I didn’t know, but promised to learn,” she recalls. 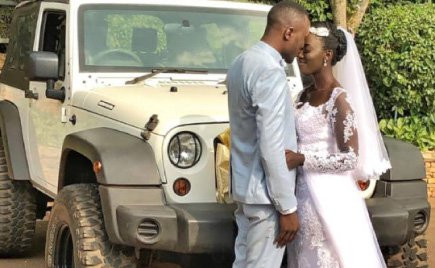 Jenny with her new lover
At least the beginning was promising. She got a home and hope for a job. The following morning, she was introduced to a dancing group where she started learning dancing skills. Earning Shs200,000 per month, Mutale envisioned a good life, until the day she was forced to quit the dancing group.

“I learnt all sorts of traditional dances. But the director of the dancing group started harassing me sexually. It was too much. I returned to Rwanda.”

With a few savings from her hustle while in Uganda, Mutale invested in fashion and modelling which she says was her childhood dream.

After years of working as a model with Veromoda- a modelling company in Rwanda, she returned to Uganda, intending to work with Arapapa, a fashion house. After everything she had been through, Mutale found love at last.

But before she presented her documents and photos, Mutale suffered a mental breakdown (perhaps the reason she forgets exact timelines and details of her story).

“Moving to the taxi park, I started hearing uncomfortable noise. The last thing I remember was undressing,” she recalls. She woke up in Butabika, the mental health national referral hospital, where she spent three months. With no relatives or friends showing up, she says, her case was reported to the Rwandan embassy in Uganda.

The embassy found her family. From Butabika she was admitted to another mental hospital in Kigali.

“I was mentally ill for two years. But upon recovery I returned to Uganda and did several menial jobs for a living. Loss of parents, mental illness, sexual abuse, drug addiction, rejection. How unlucky could I be? How much more pain did I have to endure?” Mutale recalls the unanswered questions that echoed in her mind.

She says in 2010, she decided to go to the shores of Lake Victoria in Entebbe, where she would have a clear view the waters and the waves.

“Just like the waves on the lake, that is how your life is being wasted,” says she heard the voice. “Just like your family was destroyed, so will you, if you do not give your life to Christ.” She smiles recalling this moment.

She accepted to give her life to Christ and confessed her sins. Gradually she started letting go of the hatred and anger she had harboured for years.

“For the first time, as an adult I was able to share my story in a multitude of people, without caring about what they would think of me.”

After sharing her story, one couple decided to adopt her- the second time she was being adopted. For first two years, she was taken through counselling and Bible study lessons.

Between 2013 and 2014, she pursued a diploma in theology at the Bible College in Nsambya. In 2016, she joined Makerere University for a certificate in Counseling and Guidance.

After seven years of revival, in 2017, Mutale and her then boyfriend decided to tie the knot.

“When he proposed, I knew he was the man for me and with him, all my dreams would come true,” she recalls.

The wedding date was set. The preparations were in high gear, we invited guests and service providers showed up on the wedding day, ready to host guests. As fate would have it, a few hours to the wedding, she received a phone call telling her the groom had not arrived.

After she decided to control her emotions, from the church service, she had photo moments with her family and friends. They went to the reception at Kabira Country Club. Eating, dancing, with different dance troupes performing, she at some point forgot that she had been deserted on one of the most important moments in a woman’s life.

Looking back at all the episodes of her sorrow, Mutale says, being left at the altar strengthened her.

“Having faith in God gave me courage to overcome the shame,” she shares.

After the wedding debacle, Mutale and her ex-fiance tried to talk things over but he did not show interest.

"I sought to understand why he decided not to show up at the wedding day, but he has never explained anything"

Mutale got married in December 2018. She met her ex-lover at church in the same counselling class.

“I am happily married to the person God had planned for me and so is my ex-boyfriend. We had both moved on with new spouses.”
Mutale says her new partner’s gentleness has healed her tattered and weary soul.
Victory at last. Looking back at all the episodes of her sorrow, Mutale says, being left at the altar strengthened her.

“Having faith in God helped me a lot. I just had to pray to Him to give me the strength and courage to overcome the shame,” she shares.

Mutale says love with her new partner is calmness after a shipwreck.

“His gentleness healed my tattered and weary soul and he earnestly wants the best for me. I have walked through the fire but now I can attest to the goodness of the Lord,” she reveals.
***
Source: My Wedding
Top Stories