Some robbers have met their waterloo after being executed by police officers in Lagos. 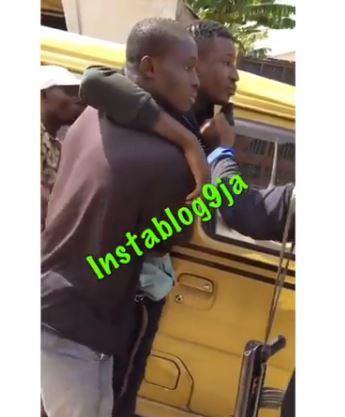 The two robbers
Men of the Anti-Robbery squad of the Nigerian police have been caught on camera killing two suspected robbers in Igando area of Lagos state.
It was gathered that the suspected robbers were in the habit of robbing victims using an online platform.
According to a victim, the robbers specialize in robbing victims after indicating interest to buy phones advertised on e-commerce site Jiji Nigeria.
The men will then ask the victims to deliver the product. When the victim arrives the agreed meeting point, the robbers will collect the items at gunpoint.
It was after the first incident that the victim planned with police officers to lure the robbers who were arrested and executed by the police officers.
However, the extrajudicial killing of the suspected robbers have raised eyebrows as the police officers refused to follow due process.
Watch video below: