The group described the attack on Ekweremadu as a callous act of ingratitude which shouldn't repeat itself. 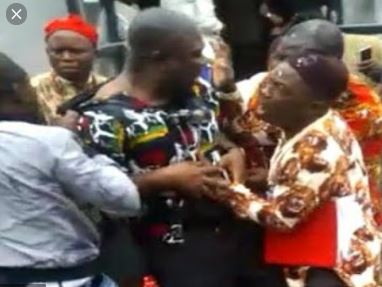 Senator Ike Ekweremadu
An Igbo socio-cultural organization, Igbo Bu Igbo (IBI), has condemned in strong terms the recent attack on the immediate past Deputy Senate President, Senator Ike Ekweremadu, by some members of the Indigenous People of Biafra (IPOB) in Nuremberg, Germany.
cThe group described the attack on Ekweremadu as “a callous act of ingratitude” onsidering that he was the same person who rallied other leaders to save Nnamdi Kanu from languishing in jail, saying that, “In Igboland, the hen does not raise its beak against the one who gave it shelter during the rainfall!”
In a statement signed by the group’s Chancellor, Dr Law Mefor; the Secretary-General, Mazi Chidi Omeje, which was made available to DAILY POST on Tuesday, IBI lamented how “the unfortunate, unprovoked and crass attack on the Senator has created the wrong notion that the Igbo cannot conduct themselves in decent manners. We reject such a notion as that is not who we are”.
“No matter what the grievances of these misguided IPOB members could be against Senator Ike Ekweremadu, resorting to bestial tendencies to settle scores is not part of our culture.”
IBI, which said the attack was unnecessary and was tantamount to descending to the arena of jungle justice which should have no place among civilized people, called on IPOB to “desist from such actions that can be used to justify the terrorist tag it has already been labeled with by the federal government.
“The orchestrated physical attack on Ekweremadu should not be seen as democratic protest, and if not condemned by good spirited Nigerians will be extended even to the ordinary citizens in due course.
“We cannot applaud barbarity under whatever guise. What is condemnable is condemnable and we condemn that mob action in Germany in the strongest terms possible.
“With the threats subsequently issued against Igbo leaders across board by IPOB, they are creating a recipe for disaster. Ndigbo must not fall for the antics of misguided leaders and members of the group to turn us against one another.
“We must stand firm in our resolve to pursue the growth and development of Igbo land without dragging it into a state of rancour, chaos, anarchy and doom.
“We urge IPOB to convert such energy and take advantage of its reach to bring about its desired good governance in Igbo land by actively participating in politics of the region and the country if it so desires.
“While we admit that the political space is still fraught with gross imperfections, it is our belief that IPOB can use its numerous strengths to prevent being shortchanged in the political processes and enthrone, through the ballot box, candidates of their choice through whom they can effectively pursue their goals.
“While we must hold our leaders accountable and scrutinize them at all times, we must also come together to vehemently reject the warped philosophy where a group purporting to be pursuing the interest of Ndigbo arrogates to itself the power to pronounce life and death on others. IPOB should not push its luck too far,” the statement added.
Top Stories