Tyson Fury Threatens To Beat Andy Ruiz With One Hand


A rematch between Andy Ruiz and Anthony Joshua is tabbed for December 7th, in Saudi Arabia. 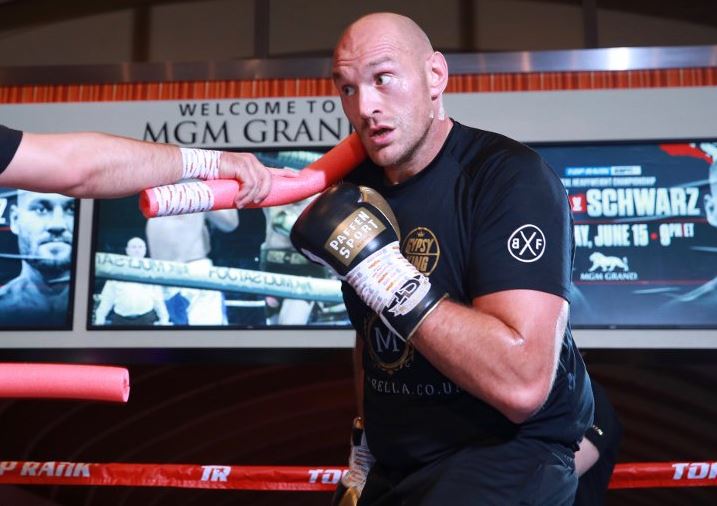 Tyson Fury
Unbeaten heavyweight Tyson Fury feels very confident in his ability dominated Andy Ruiz, who holds the IBF, IBO, WBA, WBO world titles.
Back in June at Madison Square Garden in New York City, Ruiz capture his four belts when he dropped Anthony Joshua four times to secure a seventh round stoppage.
A rematch between Ruiz and Joshua is tabbed for December 7th, in Saudi Arabia. Fury believes that he would easily defeat Ruiz - if the fight came together.
"Listen, we never know what's going to happen in life and I can never say no to anything. But one thing I will say is, I will let the fans decide, which hand I put behind my back and beat Ruiz with the other hand - because I only need one hand for him," Fury told TMZ Sports.
On the other hand, Fury has also picked Ruiz to win the rematch with Joshua.
Fury resumed his run back in June, when he stopped overmatched Tom Schwarz in two rounds. He's scheduled to return to action on September 14, at the T-Mobile Arena in Las Vegas, when he faces unbeaten Swede Otto Wallin.
Should Fury come away with the win, he claims a deal is complete for a rematch with WBC world champion Deontay Wilder on a date in February. Wilder will also have to come away with win, when he faces Luis Ortiz in a planned November rematch.
Wilder and Fury fought to a controversial draw back in December 2018 at Staples Center in Los Angeles. A planned rematch fell apart earlier this year, when Fury signed a co-promotional contract with Top Rank and ESPN. Wilder is under contract with Premier Boxing Champions, who have content deals with Showtime and Fox Sports.
Top Stories