Orphan Stranded In LUTH As He Owes Hospital N600,000


Sadly, the orphan currently lives on the generosity of other patients on admission in the ward as he had nobody to cater for him. 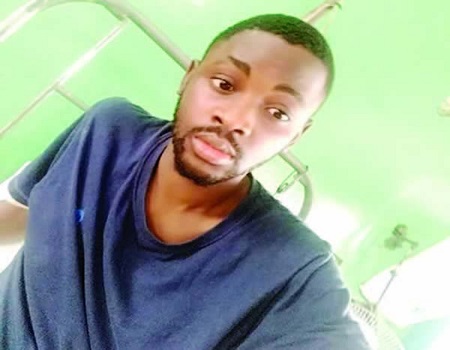 Adeniyi Onalaja
A 25-year-old orphan, Adeniyi Onalaja, is now hale and hearty, but stranded in the sickbed of the Lagos University Teaching Hospital, Idi-Araba, waiting for means to offset his N600,000 hospital bill.

Onalaja, a generator repairer, had undergone a surgery in the stomach on April 4, 2019 at the hospital to get rid of a tumour that weighed him down.

City Round learnt that his ordeal started in March when he started experiencing chronic pains in his stomach. He was taken to a hospital at Agbowa, Ikorodu and was later referred to LUTH on April 4, 2019.

Upon medical examination, he was advised to go for a scan which revealed that a tumour was growing in his stomach.

He was scheduled for an emergency surgery on April 10, 2019 after signing an undertaking that funds would be made available.

His recovery suffered a setback on April 23 as he could not sleep or eat and he had to undergo another surgery. He has been fine after the second surgery, but remains a resident of Ward E6 in the hospital.

“I have no means to pay the hospital bill. My father died in 2006. It was during the course of trying to raise funds so that I can be discharged from the hospital that my mother died last month.

“I owe the hospital about N600,000, including expenses incurred for surgery, admission, laundry and drugs from the pharmacy,” Onalaja, who hails from Ijebu-Ode, Ogun State, said.

Sadly, the orphan currently lives on the generosity of other patients on admission in the ward as he had nobody to cater for him.

“I can fend for myself through my generator repairing skills once I leave the hospital. I am appealing to well-meaning Nigerians to please help me out of this travail,” he added.