Speaking also at the press conference, the Primate warned former Vice President Atiku Abubakar not to continue in pursuit of his mandate at the tribunal as it will not come to fruition. 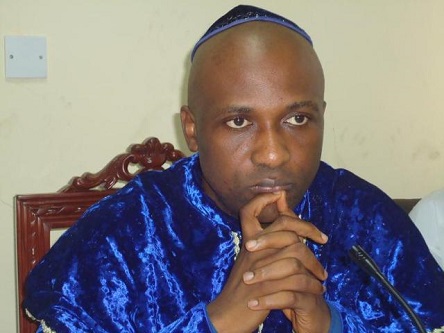 Speaking at a press presentation of the latest edition of his best seller, “Warning to the Nations, the 2019/202 and Beyond Edition”, the servant of God revealed the parties that will likely win the forthcoming governorship elections in Bayelsa, Kogi and Edo states.
According to him: “For the election in Bayelsa in November, if it is free and fair, PDP will win. In Kogi State, it is going to be volatile; if PDP wants to get it right and win, Dino Melaye should be the best candidate for them; otherwise Governor Yahaya Bello will retain that seat. In Edo State, PDP cannot get it. If PDP don’t want to waste their money, let them wait for the next four years because APC will still retain that seat. I appeal to Governor Obaseki of Edo State to align with his boss, Adams Oshiomhole, continue with his developmental projects, that will help him coast to victory. At the moment PDP cannot take Edo State, it will still be maintained by APC.”

Primate Ayodele has been publishing prophesies since 1994 and has always given insights to the happenings going on in various arms of government all over the world and a number of his prophecies have been proven to come to pass at various points in time.

Speaking also at the press conference, the Primate warned former Vice President Atiku Abubakar not to continue in pursuit of his mandate at the tribunal as it will not come to fruition.

“For Atiku and Buhari tribunal, Atiku should step down. The money he is using to hire lawyers to go for further court cases should be used to help the poor in our society because it will be a waste for him to continue. He can still pursue his cause later in the next election but he cannot win at the tribunal or even at the Supreme Court. As for the Kano case at the tribunal, PDP’s governorship candidate will win it but it will be maneuverer.”

The Primate did not give a positive prediction concerning the economy, saying the country is likely to go into another recession if care is not taken.

“We are still going to face another recession if we are not careful enough because Nigeria is broke; that’s what’s God said to me. Buhari should not take the security issues for granted thinking he can handle it. He should sack all the service chiefs because they don’t know what they are doing again. He should put the right people there so that the country can move forward. Buhari should also change his economic team and put competent hands so that the poor will not continue to stone the rich,” he said.
Top Stories