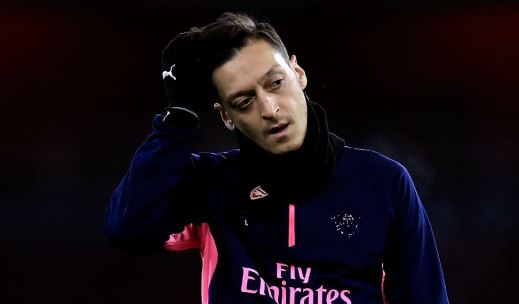 Mesut Ozil
Arsenal midfielder, Mesut Ozil could leave Arsenal before the transfer window shuts down on September 2, according to Soccernet.
This was after Germany ex-international was left out of Unai Emery’s squad that suffered a 3-1 loss to Liverpool last Saturday.
Ozil was fit and available for selection but was left out by Emery.
He has struggled for starts since Emery replaced Wenger as Arsenal manager.
The midfielder also missed Arsenal’s opening league clash against Newcastle following threats to their security after a car hijacking incident which involved him and Kolasinac.
Although he returned to training after Arsenal’s win over the Magpies, he was not in the squad that beat Burnley due to illness.
However, he recovered ahead of the clash against Liverpool but was overlooked by Emery, and that has put his future into doubt
When asked why Ozil was not in his squad, Emery hinted the former Real Madrid star was not ready, “The players here are the ones we think were the best physically to play today,” The Spaniard said.
Ozil’s omission has put his future at the Emirates in doubt but he could encounter difficulties in getting a move away from the club due to the high wages he commands at the club.
Top Stories