The medium reported that Kargbo made a PowerPoint presentation during her testimony, detailing how God had blessed her "within a short period of her appointment." 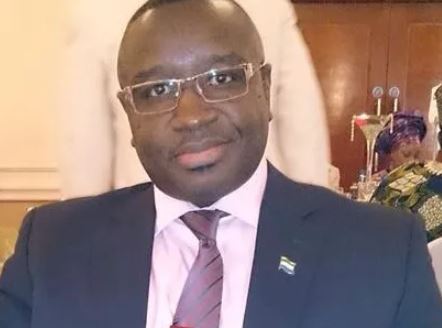 Ms Kargbo, who worked as the president’s State Chief of Protocol had travelled to Nigeria to share her testimony, a handful of online medium had reported.

The ex-presidential aide reportedly showed photos of her appointment letter and luxurious house during her testimony.

The East African stated, “The Anti-Corruption Commission began probing State Chief of Protocol Fatmata Edna Kargbo after a video of her talking about her wealth went viral early August.

“In the video, Ms Kargbo gave a testimony about her wealth at the Synagogue Church of All Nations, a church based in Nigeria, sparking outrage from citizens.”

The medium reported that Kargbo made a PowerPoint presentation during her testimony, detailing how God had blessed her “within a short period of her appointment.”

Spokesman of the nation’s anti-corruption agency, Success Kamara, on August 27, 2019 was quoted to have told the Africa Review that “Such a testimony, we think, is a cause for concern.”

Kargbo reportedly testified, “I want to thank God for blessing me with this job as SCOP to the President of Sierra Leone, ambassador at large and the blessings that come with it.

“If you look closely at this picture, you will see my luxurious house God has blessed me with.

“I was living in a single room apartment. But my story is now different.”

It was reported that the Sierra Leonean public has been discussing the issue with frustration, especially at a time when the government says it’s trying to minimise public spending.

Quoting a letter by the Office of the Sierra Leonean President, online media stated, “The official has been relieved of her duties following a testimony she gave in a Nigerian church.

“Further administrative investigations will be carried out.”

Also, in a press release on Wednesday, Sierra Leone’s Anti-Corruption Commission said Kargbo is being investigated.

“The Anti-Corruption Commission has opened an official investigation into the conduct of the official and her testimony.

“We will also look at her source of wealth in acquiring her house and other properties.

“If it contradicts the anti-corruption act or we find instances of unexplained wealth, she will be charged to court and will be asked to pay a fine,” the release said.
Top Stories