The gunmen were said to have mounted a barricade around Olam Farm, where they carried out the kidnap and killed some travellers who ran into them. 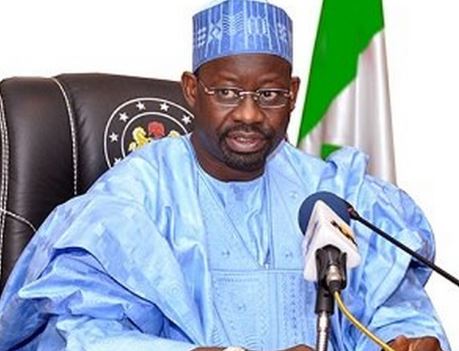 The incident happened on Tuesday evening, according to one of his aides, Ibrahim Y. Tanko, who posted a video of the incident on his Twitter handle @MrYTanko.

The video was recorded by the ex-governor’s security aides, Tanko said; adding that Dankwambo was travelling to Abuja when the incident happened.

“Time was around 4:35pm on Tuesday and His Excellency was travelling in a convoy to Abuja.

“The kidnappers blocked the Abuja-Kaduna express road, but the security men in our convoy gave them a chase.

“The hoodlums still managed to abduct about seven people, though,” the aide narrated.

Another aide who wished to remain anonymous told journalists that Dankwambo’s convoy ran into the kidnappers while they operated on the highway, and that his security details fired into the air and dispersed the criminals.

He disclosed that the bandits killed three persons in the process.

Other road users who witnessed the incident also said that the gunmen mounted a barricade around Olam Farm, where they carried out the kidnap and killed some travellers who ran into them.

“The gunmen blocked the expressway and shot at passing drivers.

“They kidnapped many people and ran into the forest with them,” the eyewitness, a commercial bus driver said.

He added that there were three dead bodies on the road, while fleeing drivers and other road users left their vehicles on the road.

The encounter lasted about 30 minutes, the driver said, adding that it was a narrow escape for him and his passengers.

“I was among the drivers that narrowly escaped the attack while driving with my passengers from Abuja to Kaduna,” the driver, who identified himself as Sani, added.

See the video posted by one of the ex-governor’s aides on the incident:

KD-Abuja road is still a danger zone. kidnappers blocked the road and were in the process of kidnapping passengers when Former Gombe Governor Ibrahim Hassan Dankwambo's convoy arrived the scene but they went away with seven people. A video from one of his security. pic.twitter.com/DFtysYmqz1