More Trouble For Ambode As Tinubu's Associates Insist On His Probe


It appears the former Governor of Lagos state. Akinwunmi Ambode might end up in serious trouble as Tinubu's men have threatened to go ahead with his probe. 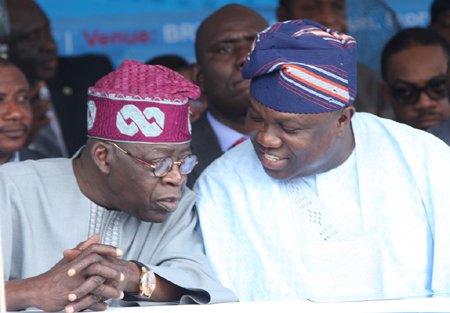 Tinubu and Ambode
Despite appears not  in sight for the immediate past governor of Lagos State, Mr. Akinwunmi Ambode, over a series of probes and investigations on his stewardship in the past four years.
Ambode, who served as governor in the nation’s commercial capital city between 2015 and 2019, in the past three months, has been linked to three different probes and investigations being carried out by the state House of Assembly and the Economic and Financial Crimes Commission (EFCC).
The investigations are namely: the probe of the abandoned N7 billion ultra-modern cardio-renal centre at the General Hospital, Gbagada, by the lawmakers; the probe of the N9.9bn linked to the Office of the Chief of Staff during Ambode’s tenure, and the setting up of an ad hoc committee to probe the procurement of 820 BRT buses by the previous administration.
Sunday Telegraph scooped that some associates of the leader of the All Progressives Congress (APC) in Lagos State, Senator Bola Tinubu, have insisted that the embattled ex-governor must be made to face the music for ‘daring the powers that be’ in the state before, during and after the 2019 general elections.
Ambode failed to secure a second term ticket after falling out with Tinubu who refused to back him but opted for the incumbent, Mr. Babajide Sanwo-Olu. He is the first governor of the state to lose a re-election bid. Tinubu has anointed the last three governors of the state since serving two terms from 1999-2007.
Speaking on condition of anonymity, an associate of Tinubu said the ‘sins’ of Ambode must be revisited and punished accordingly, adding that the immediate past governor had plans to derail the Lagos’ political structure that brought him to limelight in 2015.
The associate, who was a former member of the National Assembly, said the notion that Ambode is being “witch-hunted” is unfounded, adding that aside grounding governance in the state in his heydays, the former governor made attempts to upset the applecart of the state’s politics.
He said: “He (Ambode) is only reaping what he sowed. If not for the maturity of our leader, Asiwaju, this state would have been off our radar due to his utterances and disposition. But his actions just about when he was about exiting till recently have been appalling that I can’t say some of them that we know and could see.
“The truth is that Lagos is not like other states; here, we reverence leadership and we don’t bypass authority even when we are not comfortable with decisions. How could you be lobbying for a ministerial position and even pressing buttons to take over the federal revenue organisation where there are leaders of the party?”
When asked if there may be a soft landing for the ex-governor, the former lawmaker said: “The issue of soft landing does not arise. Anyone found wanting should be made to face the music. The most outrageous of all the issues is when people dress the whole development around Tinubu. It’s unfair because he is not the party, he usually consults with his associates in the party. For some of us, the House of Assembly has our support on this and we hope to see to the end of this.”
But an associate of Ambode insisted that the probes were a witch-hunt, saying, however, that if the ex-governor erred while serving, he should be held responsible, but noting that there was no ground the former governor would be found wanting.
Pleading that his name should be left out, he said: “The House of Assembly has the right to set up a panel and if you listen to the Speaker, he didn’t even mention the former governor’s name; but it’s all looking like a harassment and witch-hunt.
“Those invited by the panel will be called, including the House Committee on Transport at the time, but don’t forget that they don’t have the power to prosecute. They don’t have the legal power to prosecute him; I only see it as harassment.
“I am an Ambode person but I’m first a Lagosian. The same House setting up ad hoc committee to probe Ambode does not have committees to oversee executive projects, but they could quickly set up an ad hoc committee. Some of us can’t keep quiet in the face of injustice. They don’t have what it takes to intimidate the former governor. Let them set up panels upon panels, they cannot intimidate Ambode, they only want to stain him. Government is a continuum; there is system and process in governance,” he said.
Meanwhile, an erstwhile factional Chairman of the APC in Lagos, Fouad Oki, has called for caution over the on-going probes of the former governor, saying that it is a move that may backfire against many interests.
“What is happening to Ambode is very unfortunate. But we must look beyond him and call ourselves to order. How many former Northern governors are being probed now? If we are not careful, it might come back to haunt all of us because we continue to expose our weakness and we have allowed the northerners to tear down our invisibility. They are busy working, they are on the chess board ahead of 2023 but we are pulling ourselves down here.
“When I stood up for him (Ambode) the other time, it wasn’t for any personal gain, but for the respect of the Office of Lagos State Governor. When the going was good, he allowed himself to be used. He allowed exuberance to take the better part of him. It’s not immaturity. It’s not because of Ambode but we must run democracy as it should be run,” he said.
Culled from NewTelegraph
Top Stories