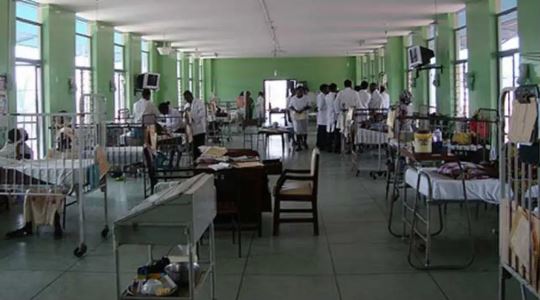 Mass exodus of medical Doctors has hit the General Hospitals in Cross River State.
When DAILY POST visited the Hospital on Mary Slessor Road, Calabar on Monday, it was observed that only two Medical Doctors were seen attending to several hundreds of patients.
A medical Doctor who gave her names as Dr Ekpoanwang Okon told a correspondent that most of her colleagues have left in search of greener pastures.
“As I am talking to you, I have applied for work at Akwa Ibom State Health facilities and they have invited me for an interview this week.
“My decision to seek another employment outside Cross River State, Akwa Ibom State was a painful decision.
“I married from Cross River, my husband is from Cross River State and my children are all here, but I cannot help because the working environment was not conducive.
“How can you work in a place like government hospital in Cross River but no salary is paid, no materials to work with, for instance, no prescription sheets, no folders, no test sheets,”.
Dr (Mrs) Okon lamented further that most of her colleagues have left the State to other States to work, “Imagine the number of people (Patients) here but only two of us are attending to them,” She regretted.
At the records department of the Hospital, a medical record officer who simply gave her name as Affiong said the situation was beyond amelioration.
“We came to the office every day to work but we have no materials to work with, no stationeries, no folders, no prescription sheet and test papers, we only improvise to work.
“We used plain sheets to write names of patients, we force patients to pay N100 and above for sheet of paper for the prescription and other sheets” She regretted.
Confirming the mass exodus of Doctors, the Chairman of Nigeria Medical Association (NMA) in the Cross River State, Dr Agam Ayuk, said the mass exodus of doctors in the state general hospital was due to poor remuneration and non-implementation of the 100 per cent Consolidated Medical Salary Structure by the state government.
He said that the Association has advised the state government to recruit more Doctors into the health system and implement the salary structure with a view to encouraging Doctors to serve.
“In terms of doctors not been enough in the state, they have been effort to increase the number although it is grossly inadequate.
“It is difficult for the state to sustain more Doctors because of the issue of remuneration. Some Doctors under the state employ usually leave for greener pastures when any opportunity comes because the working condition is not favourable” he stated.
When contacted on phone on Monday, the Permanent Secretary, Ministry of Health, Dr Joseph Bassey said he could not comment on the issue for now as the Chief Medical Director was in the theatre.
“What you are telling me is strange, even if I am to give you an answer, I have to call him first and hear from him, he will be in a better position to say why those things are like that,” he stated.
Top Stories