Politicians elected into office using funds given by internet fraudster to be exposed by the EFCC. 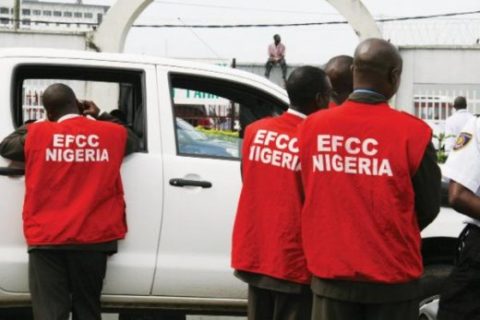 EFCC
The Economic and Financial Crimes Commission has raised the alarm over its findings that some internet fraudsters had funded some politicians into elective positions.
According to Punch, the agency also vowed to release names of such politicians and their internet scammer sponsors.
The Zonal Head of EFCC, Port Harcourt Zone, Mr. Abdulrasheed Bawa, disclosed this on Tuesday in Port Harcourt while speaking with newsmen on the anti-graft agency’s collaboration with the Federal Bureau of Investigation in the fight against internet fraud.
Bawa lamented that cyber crime was tarnishing Nigeria’s image and killing genuine businesses, adding that the agency will soon make public names of suspected cyber criminals and the candidates they sponsored to contest public offices.
He stated that such publication would be done at the end of its ongoing thorough investigation.
He disclosed that the EFCC in Port Harcourt zone had arrested 105 cyber crime suspects, and had also secured 32 convictions of fraudsters in the last eight months.
The EFCC in the zone had also secured the conviction of 149 oil thieves between January and August, Bawa said.
Explaining that the commission has been working on 13 suspected internet fraudsters on FBI’s watch list, Bawa added that one Ogbonnah Atoukaritou, who was formerly based in London; and one Chidi Egbeonu, formerly based in Japan, were currently in EFCC net.
“The last eight months have been months of intensive and extensive investigations and prosecution of oil-related and several internet-related cases in which the zone has recorded 149 convictions, recovered N268,934,375.75, $2,012,568.00 and 15,000.00 euros; with 162 cases pending in court,” Bawa further disclosed.
Top Stories