One of the influencers in the Nigerian social media space has urged the BBNAIJA reality show organizers to take a break. 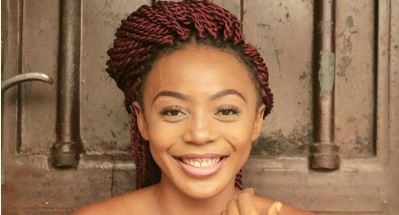 Ifu Ennada
Big Brother Naija 2018 star, Ifu Ennada, has tasked organisers of Big Brother Naija 2019 ‘Pepper Dem’ edition to have the housemates do a task showing the evils of xenophobia.
Her statement followed renewed xenophobic attacks on Nigerians in South Africa where three persons were gruesomely killed.
The reality TV star said on Instastories on Tuesday that if the organisers of Big Brother Naija cannot have the housemates do a task on xenophobia, the show should take a 24-hour break to show solidarity with Nigerians.
“BBNaija can you get the housemates to do a task showing the evils of #XenophobicAttacks?
“You make a ton of money from us, so this is the least you can do. If you can’t do this, I suggest you go on a 24hrs break,” she said. 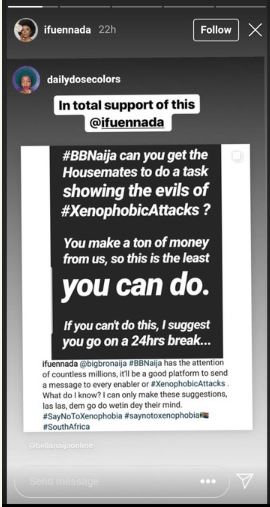 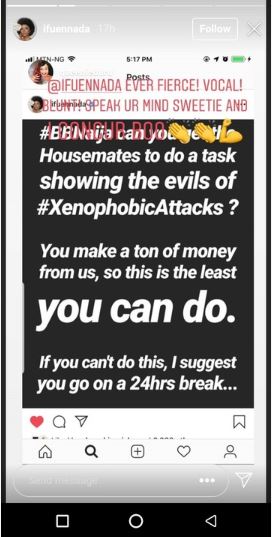 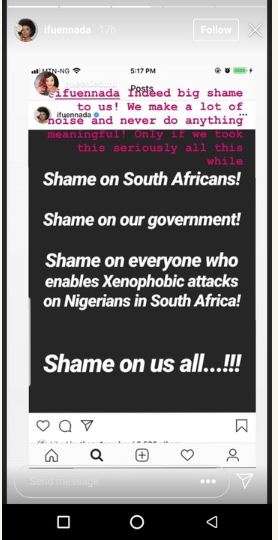 Ifu Ennada, a native of Abia State, was among the 20 housemates for the 2018 Big Brother Naija reality TV show.
She received a nomination in the Best Young Actor category at the Africa Movies Academy Awards (AMAA) in 2016 for her role in movie, O-Town.
Top Stories