Some Nigerians have been seen attending the World Economic Forum holding in South Africa despite the nation pulling out over xenophobic attacks. 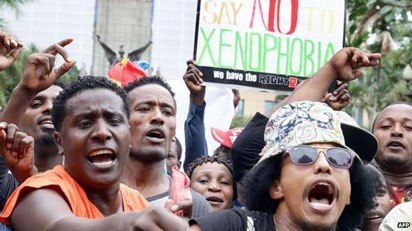 People protesting against xenophobia
Despite the Federal Government withdrawal from participating in the World Economic Forum, WEF, taking place in Cape Town, South Africa as a result of the xenophobic attacks on Nigerians, some governors and members of the business class still went ahead to attend, Vanguard reports.
The Minister of Foreign Affairs, Mr. Geoffrey Onyeama had on Wednesday told State House correspondents after meeting with President Muhammadu Buhari at the Presidential Villa, Abuja, that the President after meeting with Vice President Yemi Osinbajo decided to withdraw from participating.
However, it was reliably gathered that the governors of Ekiti and Kaduna as well as some members of the business class from Nigeria are attending the ongoing forum.
Fielding question from journalists on whether the participation of some Nigerians including the governors was not an affront on the position of the Federal Government, the Minister of Foreign Affairs explained that the governors may have arrived South Africa before the decision was taken.
Besides, he said that the WEF was not a South African event, rather a global forum but taking place in South Africa.
He said, “The World Economic Forum process has started a number of days ago and the governors who are there had gone there ahead even before this whole issue materialized, they were already engaged in that.”

"The first thing you have to realize is that the World Economic Forum is not a South African government initiative. It is a Swiss based mechanism and it takes place in different places.
”It is not a question of disobedience because they were actually there already before this decision was taken.”