Many people have been left stranded after a bridge linking some Bayelsa communities collapsed under the weight of a truck. 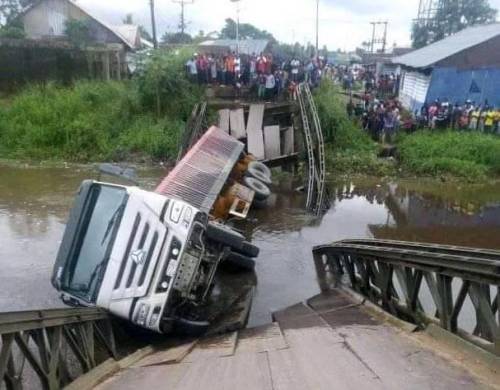 The bridge collapsed
According to SaharaReporters, the Elebele community bridge which served as a link between the community and other communities in Ogbia local government area of Bayelsa State has collapsed.

A trailer laden with building materials caused the damage while driving on the narrow bridge on Thursday.

A statement by Ogbia Brotherhood Youth Council has advised people to use alternative routes while appealing to the relevant agencies to come to their aid.

“The general public is hereby notified and should take alternative routes to their destinations. Elebele is a transit community and as a result, the collapse of this bridge will no doubt cause untold hardship not just to the people of Elebele but also to commuters who ply the route.

“The leadership of the Ogbia Brotherhood Youth Council is using this medium to call on the state government, local government, SPDC and other stakeholders to as a matter of utmost concern come to the yearnings of the people.”
Top Stories