A suspected drug baron has been nabbed with a pump action gun which was loaded with cartridges in Kogi. 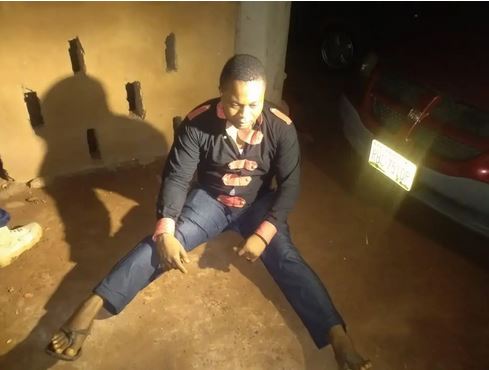 Ameh
According to a Daily Post report, a suspected drug baron identified as James Ameh has been arrested by the Kogi State Command of the National Drug Law Enforcement Agency ( NDLEA).

Ameh who was arrested at about 5:30am on Thursday was in possession of a pump action gun loaded with cartridges.
Daily Post reports that about 40 personnel of the NDLEA along side officers of the Nigeria Security and Civil Defence Corp (NSCDC) left Lokoja in the early hours of Thursday to effect the arrest of the drug kingpin who has been on the wanted list of the command for several months.

It was further learnt that the suspect who was arrested in Igolijo community under Igalamele Odolu Local government Area, allegedly has 10 hectares of land where cannabis sativa is being cultivated.

Ameh who was arrested alongside six other suspects namely: Usman Bello, Eze Stanley, Innocent Ameh, Samule Idoko , Ojima ojo, and Ekene Ukwueze told journalists that, he got the pump action gun from his friend who still owes him N80,000.

However, the 54-year-old suspect who is also a native doctor denied knowledge of the allegations levelled against him saying the gun found in his possession serves as collateral security towards recovering his money.

His said ”I am not the real owner of this pump action gun. It belongs to a friend who is owing me N80,000. I needed my money back urgently to do something with it. I’m sorry, I never knew that having this in my house would put me into trouble. As for the issue of dealing on drugs and having hectares of land for cannabis, it is also not true”.

Speaking to newsmen shortly after the arrest of the drug kingpin, the Kogi state commander of the National Drug law Enforcement Agency ( NDLEA) Alhaji Idris Bello said that the arrest of the suspect and his accomplice was made possible through an information gathered by officers of his command.

While stating the support NDLEA is getting from the state government, Bello warned that whoever that is caught engaging in illegal drug business will be meant to face the full wrath of the law.

According to him, the suspects will be charged to court as soon as investigation is concluded and the items recovered from the suspects which include pump action gun, and seven live cartridges will be confiscated.
Top Stories