'Have You Come To Tell Me I Lost To Buhari?' - Adoke Reveals Jonathan's Post-Election Blues


A former attorney-general, Mohammed Bello Adoke, has made some revelations about Goodluck Jonathan's post-election blues. 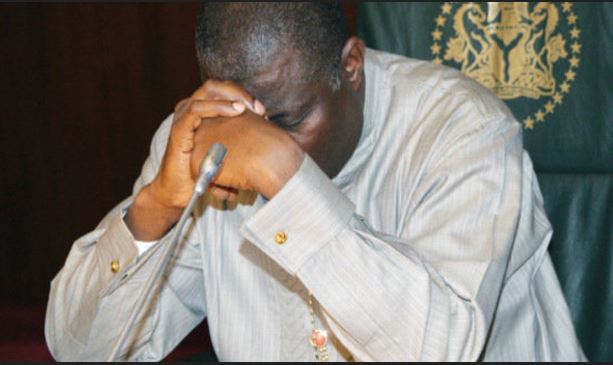 Goodluck Jonathan
The day after the presidential election in 2015, President Goodluck Jonathan already had a feeling that things did not go well — according to Mohammed Bello Adoke, who served as his attorney-general for five years.

In his book, “Burden of Service: The Reminiscences of Nigeria’s Former Attorney-General”, due for release in Nigeria on September 16, Adoke described in detail the days following the March 28 election which saw an incumbent president lose for the first time in Nigeria’s history.

The book, published by published by Clink Street Publishers in London and New York, was seen in advance by TheCable.

Jonathan, the flag bearer of the Peoples Democratic Party (PDP), scored 12,853,162 votes but lost to Muhammadu Buhari, candidate of the All Progressives Congress (APC), who polled 15,424,921.

When Adoke and other appointees went to see Jonathan at the presidential villa a day after the poll, and with results just trickling in, Jonathan seemed to have a premonition that it was all over as he asked them: “Have you come to tell me I lost the election?”

On March 30, a day after Adoke’s visit, with final results still being awaited, Jonathan was already clearing his books from the shelves at the presidential residence when Mike Oghiadomhe, his former chief of staff, walked.

On seeing the surprised look on Oghiadomhe’s face, Jonathan said: “Look, Mike, elections have been won and lost. A President has been elected. It is time to go home.”

On March 31, Jonathan did the unusual — he picked the phone and congratulated Buhari while the Independent National Electoral Commission (INEC) was yet to officially declare the winner. Jonathan’s gesture was also the first time in Nigeria’s history.

The day after, Buhari was officially declared the winner.

“On Sunday, 29 March 2015, the day after the presidential election, I, along with Col. Sambo Dasuki, National Security Adviser, and Ambassador Hassan Tukur, Principal Secretary to the President, went to the Presidential Villa to see the President as the feedback we were getting on the elections appeared rather bleak. It had become obvious that the political leaders who promised to deliver certain states had failed. Worse still, they had betrayed our confidence. We needed to apprise the President of the situation to prepare his mind for the worst,” Adoke wrote.

“It was lunchtime at the Villa but there was no merriment on the menu. The President did not look particularly sad, but, understandably, neither did he exude that much confidence. When he popped the question (“Have you come to tell me I lost the election?”) it had the impact of stilling the atmosphere, further chilling out the already fraught state of things. The ensuing silence had an edge to it. You could hear a pin drop! The air of foreboding was acute. Of course, we had not come to tell him he had lost. That would have been too early. Announcement of results was not to be expected before Monday, 30 March. In fact, the winner was not expected to be officially announced until Wednesday, 1 April. Our mission, rather, was to review the situation.

“‘If I lose, I will not contest the outcome. I will call and congratulate Gen. Buhari,’ he promised, not for the first time.

“Looking at him at that moment, we could see a man who was at peace with himself, a man who was more worried about getting the election process right. It was not about losing or winning the race.”

PREPARED TO CONCEDE TO BUHARI

The former AGF said he tried to cheer up the president, telling that “nothing is certain yet. We could still hope for a run-off even if we don’t win at first ballot”.

He continued: “He did not look convinced. Perhaps I was in denial. Much as we tried to change the topic, we could not get away from discussing our disappointment with politicians whom we had thought trustworthy. What remained clear to us, however, was that the President was prepared to do what no previous presidential candidate had ever done in the history of Nigeria: concede an election while the final result was yet to be announced. Even Alhaji Bashir Tofa who was reported to have congratulated Chief MKO Abiola in the June 12 presidential election of 1993 ended up denying that he did.

“On 30 March, a day after our visit to President Jonathan, Chief Mike Oghiadomhe, Chief of Staff to the President from 2010–2014, also went to see him at the residence. He told me that he found his former boss taking down his books from the shelves and packing them, obviously in preparation for his exit from office. Seeing the surprised look on Oghiadomhe’s face, President Jonathan said: ‘Look, Mike, elections have been won and lost. A President has been elected. It is time to go home.’ From all indications, Jonathan believed he had lost the election. He was prepared to concede to Gen. Muhammadu Buhari.”
***
Source: TheCable
Top Stories