Drama As Policewoman Beats Up Her Lover's Wife In Lagos...You Won't Believe Why


A policewoman has reportedly attacked and beaten her lover's wife in a community in Lagos state. 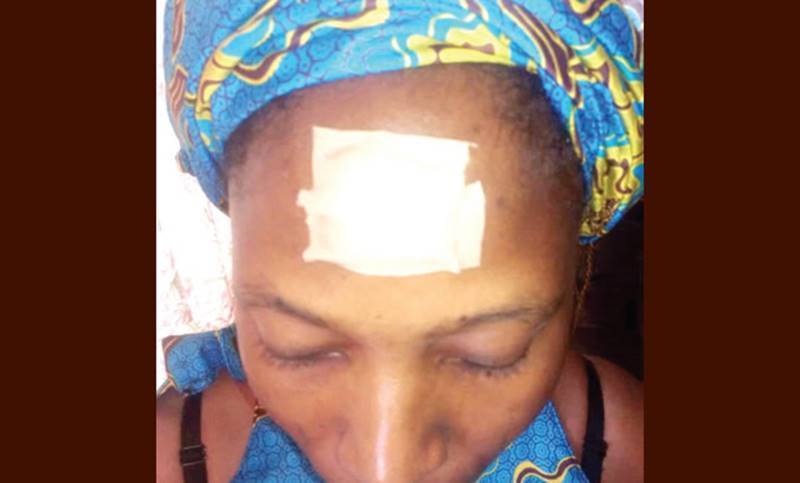 Atinuke
According to a report by Saturday Punch, a policewoman with the Lagos State Police Command identified simply as Yemisi is in the eye of the storm after a housewife, Atinuke Odeleye, accused her of assault.

It was learnt that the incident, which occurred on Tuesday evening in the Igando area of the state where the couple resides, marked the height of a running battle between Atinuke and the policewoman.

It was gathered that the mother of two sustained an injury on the forehead in the process.

A Saturday Punch correspondent who spoke with the parties involved in the issue got different accounts of the incident.

In her narrative, Atinuke, 38, said she discovered that her husband, Abiodun Odeleye, was having extra-marital affairs with Yemisi sometime in March 2019 after she saw text messages they exchanged with each other on his phone.

The woman explained that she called Yemisi on the phone and warned her to desist from dating Abiodun, but she ignored her warning.

Atinuke stated, “She started threatening me on the phone. I went to report her at the Igando Police Station on Saturday, September 7. I gave them a picture she and my husband took together. When they called her on the phone, she said she was on duty and promised to come to the station later. I learnt she later went there and told them that she was pregnant for my husband.

“In the evening, she came to my house with a bottle and threatened to kill me. I went back to the police station to report her, but they did not do anything. On Tuesday evening around 10pm, she came to my house again to attack me. She hit me on the forehead with an object and destroyed my phone. I didn’t bother to report the assault to the police because they did not act on my complaint.”

But Yemisi, who spoke to our correspondent on Friday, debunked Atinuke’s allegations against her, claiming that she is Abiodun’s “second wife.”

The policewoman, who is in her late 30s, also denied attacking Atinuke, adding that the woman came to attack her at Abiodun’s brother’s house in Igando.

She said, “Her husband married me as his second wife and I know his family. We have done introduction and I am pregnant for him. Why would I break something on her head? There was a day a relation of our husband called both of us to settle our differences, she slapped me three times there. I didn’t do anything so that people would not say I am using my position as a police officer to cheat her.

“That Tuesday evening, I visited our husband’s elder brother around Igando and she came to attack me there. She wanted to tear my clothes. I didn’t do anything because I am not supposed to fight in public. I was surprised when she said I injured her. Maybe she used something to injure herself to blackmail me. Anywhere she sees me, she wants to fight me but I always avoid her. I didn’t destroy her phone.”

The man at the centre of the crisis, Abiodun, told City Round that Yemisi is his girlfriend, but said she was not pregnant for him.

Abiodun, an estate agent and a road transport union official, said Yemisi had visited him at a shop within his vicinity when his wife saw her.

The 40-year-old man said a fight ensued when Atinuke wanted to snap the policewoman with her phone, adding that his wife’s head hit something during the scuffle.

He said, “She (Yemisi) is not my wife; she is my girlfriend and she is not pregnant for me. We just have to settle everything amicably. She didn’t come to our house that evening as my wife claimed. My wife saw us where we sat and came to sit beside us.

“After some minutes, she stood up to leave and brought out her phone to snap her. She challenged her for snapping her and it led to the fight. It was when they were fighting that my wife’s head hit something. I have warned her (Yemisi) not to come to our vicinity again.”

The spokesperson for the police in the state, DSP Bala Elkana promised to get back to our correspondent with comments on the incident but he had yet to do so as of press time.
Top Stories